Fact of the Day: Conrad Heyer 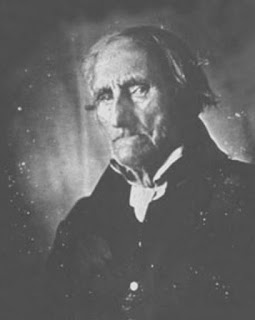 Conrad Heyer was a soldier in the American Revolution in his youth. He served under George Washington and he was there during the Crossing of the Delaware. At the age of 103, his photograph was taken and he became the earliest-born person who had been photograph that we know exists for certain.
Posted by Adam at 12:00 AM

I've seen the first person ever photographed, he was an a Parisian street having his shoes shined, but we don't know his name, unlike the person in your post.

He sure lived a long time

Wow! He sure lived a long life!

Oh, the history of photographs is so interesting! Thank you for stopping by my blog, and leaving me a kind comment :)

Wow, what a great picture and so much history. Thanks for this. Have a great day.

When was the photo taken?

If I'm doing the math correctly the photo was taken in 1852. Imagine being 103 in 1852, and Heyer lived until 1856. Sometimes your posts send me looking, because they are so intriguing, Adam! Now if we only know when that unknown man on the street in Paris was born and his name! LOL