Fact of the Day: Empress Shoken 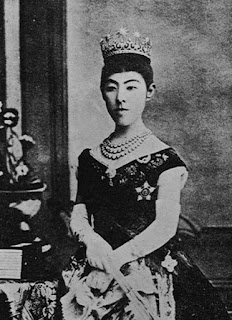 Born Masako Ichijo, Empress Shoken was a bit of a prodigy in arts and education when she was young. She was also of enough noble-birth to be a consort to an Emperor. However her biggest obstacle in marriage was that she was three years older than Emperor Meiji. The issue was "resolved" by changing her birth-date, but it only made it her only officially one year younger than reality but still older than her husband Emperor Meiji.
Posted by Adam at 12:00 AM

Goodness, it seems strange that age would make such a difference as that back then, Adam. Hugs...

lol placebo at it finest.

Funny I wasn't expecting that

Interesting. I am older than my significant other (5 yrs) and I admit it bothers me lol.

It would seem to be an insignificant change.

How funny. I didn't know this.

What a difference a year makes!