Fact of the Day: Gaunt Mockery 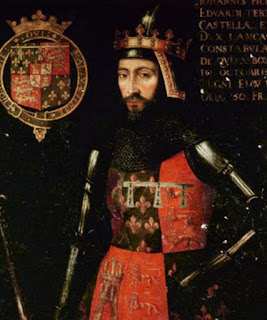 While never officially King (though his father Edward III and son Henry IV were) John of Gaunt held considerable power throughout his life especially during the reign of his young nephew King Richard II.  However in his later-life he was unpopular, and his enemies spread rumors that he was really the son of a Ghent butcher as his father Edward III was not present during his birth. The stories obviously drove him into a fury.
Posted by Adam at 12:00 AM

Poor guy. Who wants a father who's a butcher!

John of Gaunt ~ I hadn't thought of him in a long time, but seeing his name really set off bells in my mind. Then I remembered Shakespeare, googled him and Gaunt, and saw that he was in "Richard II." That was one of my favorite plays when I studied Shakespeare decades ago. It was Gaunt's speech just before his death in the play, about England's beauty and divine favor as a country that was trying to break through in my memory. Thanks for bringing that back. Quite a life Gaunt led! I'll be back to catch up on your other posts soon. Take care!

So they made him go nuts, not very butcher like

Why in the world would someone start a crazy rumor like that?

I blush to admit I know nothing about him. Once again, you broadened my horizons.

So much drama with these people!

Like you I studied Richard ll in High School and recall John of Gaunt. I think he features in many BBC Educational series on history and literature.
Strange how a "writer" on this page has never it appears read any Shakespearean plays!!!???? One would think that a so-called fiction writer of "romantic ???" novels would have studied SOME SHAKESPEARE.......then again she doesn't know much about geography, topography or seen an atlas!

On the subject of butchers, both my grandfathers and my father were never happier when carving up a slaughtered sheep or bullock. They took so much pride in their self-trained butcher skills. However, none of them were much good with Shakespeare!
Cheers
Colin

He was a powerful man and not someone to cross, king or no king.

Cheers, Colin! My father was great with Shakespeare, but would have probably passed out at the thought of carving up a sheep or bullock. He was pretty good with a Sunday roast though and loved his carving knives very sharp.