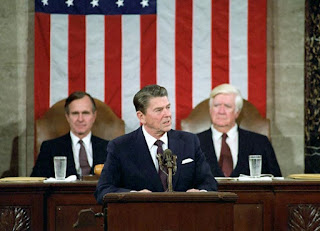 Despite claiming to be pro-life later in his political career, as Governor of California Ronald Reagan signed a bill that legalized abortions in California as it was before Roe v. Wade. He later said it was a mistake to sign the bill, and blamed it on his "lack of experience" in government.
Posted by Adam at 12:00 AM

Old fogies do and say whatever will get them a vote.

That is interesting, Adam. Hugs...RO

You know a politician is lying if their lips are moving.

Even though my religion is against abortion, I think that women have the right to decide. It's their own body, and circumstances sometimes necessitate tough decisions.

Nothing like discovering political expediency is more important than your values! It's a woman's body. She alone has the right to decide about her health.