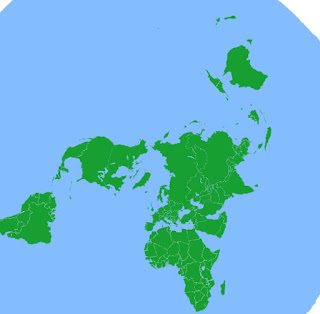 Wilbur Glenn Voliva was an American Christian evangelist who owned his own radio station which had listeners world-wide in the early 20th century. Voliva was very against the fact the Earth was a globe and he was so confident the earth was flat that he offered a large reward to anyone who could prove the earth was round. He also preached against the "evils" of evolution and also thought the sun was about three thousand miles away from the Earth. He commented on the matter by saying "The idea of a sun millions of miles in diameter and 91,000,000 miles away is silly. The sun is only 32 miles across and not more than 3,000 miles from the earth. It stands to reason it must be so. God made the sun to light the earth, and therefore must have placed it close to the task it was designed to do. What would you think of a man who built a house in Zion and put the lamp to light it in Kenosha, Wisconsin?"
Posted by Adam at 12:00 AM

I don't know whether to laugh or shake my head at some of these things.

Always good to have alternative opinions but facts often put that to bed.

Interesting, we have come a long way since then.

I wonder what his view on dinosaurs is.

HEEHEE....this guy sounded like a winner:D He would've probably gotten along with the Cheeto president!

Laughable. I always find it interesting that some people pick and choose the science they want to believe in. If science provides great medicine and technological advancement, everyone is for it. But when it comes to religion or climate change, people choose to disregard science.

I laugh and cry at the same time since some people, today, feel the earth is flat.....shaking my head in utter disbelief

Birgit.
Shaking one's head will give you a headache.
Looney of the highest degree..........BUT no doubt
he had believers. And worse still probably still does!
Maybe Betsy Devos believes............and even Turnip Top??
Colin

I hate scientific ignorance, especially in the name of God.