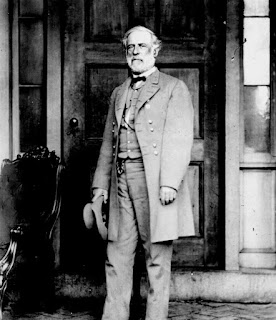 "Madam, don't bring up your sons to detest the United States government. Recollect that we form one country now. Abandon all these local animosities, and make your sons Americans."

One of the biggest ironies I see here in the South is a racist "rebel" carrying both a Confederate flag and a American flag together. The two flags could not hold any more different meanings from each other. While most southerners are proud to be Americans, the neo-confederates quickly forget that the Confederacy was all about leaving the United States. While the South as a whole sort-of took his advice here, the horrid traditions of racism and bigotry hiding under the excuse of "state's rights" still influence the current conservative politics of today. If only Robert E. Lee told them not to underachieve when becoming Americans.
Posted by Adam at 12:00 PM

Word! I love that quote. Going to have to share it.

Kid Rock was protested against when he sang the national anthem for the opening of Detroit's new arena.
Because in his past concerts he's hung confederate flags....literally that's the only reason.

The whole confederate subject should be more educated on in schools. Not just "General Lee wanted slaves, Grant wanted them to be set free".

History. Much to dig into.
Love your random historical facts.
Never fail to learn something new everyday, if visiting Neko Random!

Lee wasn't a bad man. If fact, Lincoln offered him command of all Union forces but Lee felt he needed to side with Virginia, his home state. He has been used by white supremacists in a way I'm sure would have displeased him.

bigotry and white supremacists are awful :(

My husband and I recently watched a 9-part series on the civil war by PBS. It was incredible and quite fascinating, and we learned all about that period. What a horrible time it was. So many young people died.

Thank God Stephen..........sense prevails with you.
Lee was a good man.........however, he was a Southerner
and that is a fact of life and he thus felt it his duty
to support his state.

I am not quite sure if this above is fact or fiction.
"Not just "General Lee wanted slaves, Grant wanted them to be set free"."
I believe the Lee family plantation did not have slaves - they were free men and women - thus they were paid in kind. That is in history books!!!!!
Cheers
Colin

Martha.
What was the name of this series, please?
Another excellent series on the US history of this period
is the Trilogy of "North and South". Excellent.
Colin

Please don't conflate states rights with bigotry and hatred. There are many people who are strong believers in states rights who aren't bigots, myself included.

The Civil War was a terrible time, with so many people dying horribly. Sometimes I worry that Americans will end up in a civil war again.

everyone should know that quote..because today? we're NOT the united states.