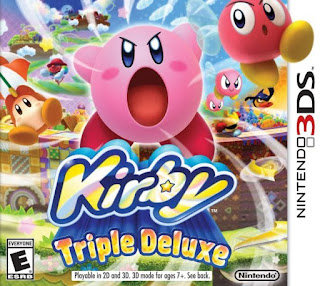 To be honest, I've been ignoring my Nintendo 3DS for quite some time, and started to play a bit of catch-up. When I was little Kirby's Adventure was one of my favorite games on the NES, and I also really liked Kirby's Dreamland 2 on Gameboy and Canvas Curse on the original DS. Most of the other Kirby games I've played were good but those really stood out. Granted I've missed a lot of Kirby games especially on the hand-helds, but was this one really that good or did it fall into obscurity among the series? 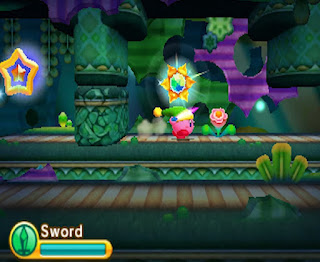 Unlike the Canvas Curse game (and its sequel Rainbow Curse), Triple Deluxe is pretty much a "classic" Kirby game. Kirby can absorb powers of his enemies (e.g. sword, cut blade, arrow, fire,etc) and float in the air. One thing I don't remember about in this game that haven't seen in previous Kirbys is the use of Sun Stones. They are special gems that you can find in the level with the number varying on what level you're on. If you collect enough of them per world, you can unlock the boss or revert back and try to find them. Most are pretty easy to find, while some are cleverly hidden, and some require the use of a power and if you don't have that power absorbed then it's impossible at that moment. Another thing is the hypernova power which gives Kirby a strange rainbow glow that allows him to inhale almost anything but the power is only used in key moments. 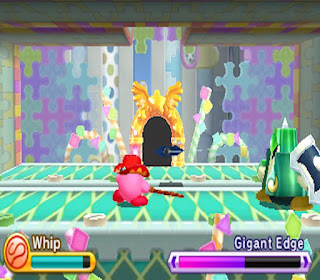 The single-player campaign is typical, six main worlds with several levels each. Plenty of bosses and sub-bosses to fight as well. If you go above and beyond with Sun Stones then you will be able to open up extra levels with a little more variety. The reason it's called Triple Deluxe is that it has 2 mini-games included. One is a Smash Bros.-ish fighter (Hal Laboratory made the original two Super Smash Bros. games) that pits several different Kirbys against each other with different powers to choose from. Another is one that features King Dedede but neither of them are that compelling especially as the fighters mini-game only supports local multiplayer. 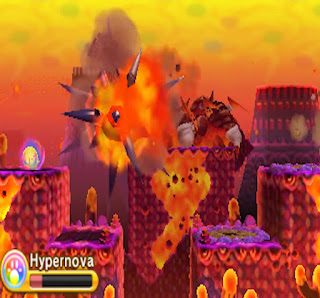 Overall I wasn't too impressed with Kirby: Triple Deluxe. A lot of the original people with the Kirby series such as Masahiro Sakurai no longer work on the games. So a lot of the creativity isn't really passed on here. It does some neat things, and there are a few cool moments, but I was more bored by the levels than anything. This may be perhaps the worst Kirby game I've played since maybe Kirby's Air Ride, but it's still kind of good too.

I'm not the only 3DS player around here! I enjoyed this game but it didn't feel like it had a lot new to offer. I just picked up the new Metroid game today...

I missed out on the whole Nintendo craze. It's probably just as well. I have enough things to take up my time.