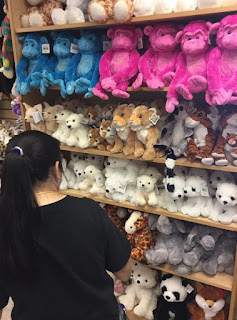 At the North Carolina State Zoo there were several places with all kinds of gifts. Daisy loves looking at the stuffed animals. 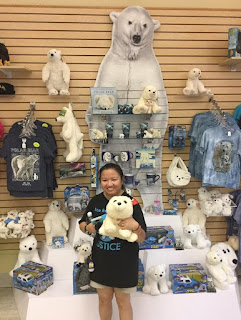 She had plenty of polar bear ones in the past but I'd let her pose with them at least. 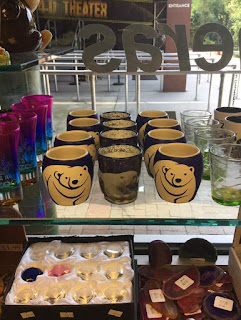 Speaking of polar bears, I was tempted to get cups with the design of a polar bear. 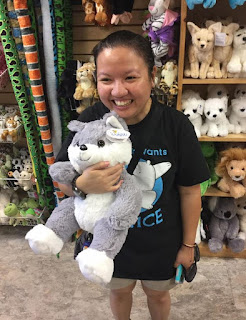 Daisy really wanted this wolf, but I told her it's really too similar to one she had gotten a few years ago. 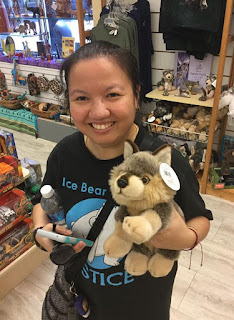 So she went with the coyote instead.
Posted by Adam at 4:10 PM

Does she have a collection?
You and Daisy enjoy the weekend:)

I still find it hard to pass up a super cute stuffed animal. Those mugs are nice!

I'm curious; how many stuffed animals does she have?

It's a cute choice!

It was fun to see Daisy with the stuffed animals. Her smile is beautiful, and it makes me smile too!

Obviously if you can/could READ the various entries of Adam on
Daisy's delight on stuffed animals carefully!
Colin

I like looking at them too, but I have to refrain from buying them anymore because I have too many!

Looks so cute ...
Daisy sure looks happy too.

I am glad she was able to find a plush souvenir to bring home from the zoo. I know how happy they make her :)

My granddaughter has so many stuffed animals that my daughter has absolutely put her foot down. Instead KC got a panda ears headband when we were in D.C.