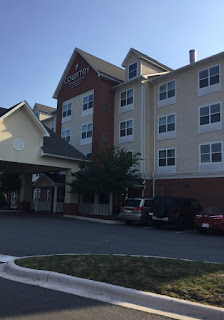 I don't travel much but I also don't have any loyalty towards one hotel chain versus another. We decided to sleep the night after a long day at the NC State Zoo at the Country Inn and Suites in Kannapolis, North Carolina. Hotels outside the city limits of major cities (in our case Charlotte) are a little less expensive and parking is usually easier. I also liked how there weren't many floors. I saw some hotels in Atlanta that remind me that I am afraid of heights. 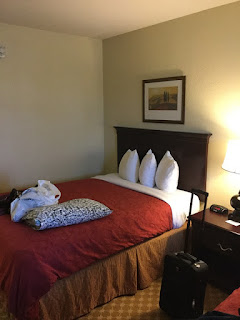 This was our room a few minutes after arriving. The stuff on the bed was our's, so the room was really clean when we walked in. The room was really cold, but since I live in a hot house (saves energy) I felt like I was in a freezer. So we had to turn it down. But to be honest, that's the strongest A/C I've felt in quite some time, so for those who like it cool, you'd love it. The bathroom was also really nice and I had no issues out of it. TV and cable was typical for any hotel. 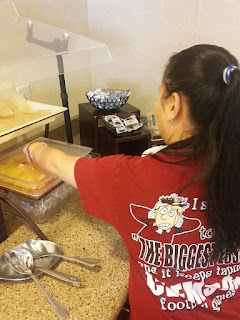 At breakfast, they served a complementary one. Since I had left-over food from the night before, that became my breakfast (I hate wasting food) but Daisy got a few things. I was tempted to get some cereal there but the only milk available was low-fat and skim, and that's disgusting as anything but whole milk is water pretending to be milk.
Posted by Adam at 5:00 PM

I love it when the complimentary breakfasts have a waffle maker!

I remember staying at a country inn & suites once and the pillows and bed were sooo comfortable I never forgot.

Dude! Don't hate the skim milk! LOLZ...but yeah...even though that's the milk I take on my cereal, nothing compares to whole milk:) And that hotel room looks pretty good!

When I drank milk, it was always skim or low-fat. Now I drink almond milk. We've stays at Country Inn Suits before and liked them.

I like the a/c turned way down when I sleep, but I don't know why. Also have to have a ceiling fan going.

It looked like you and Daisy stayed at a nice hotel, Adam! I love staying at hotels that come with breakfast included. They are so convenient when you want to get an early start on the road. I would love to talk Terry into drinking whole milk. He insists on 1%. (So I spike my cereal milk with a shot of half and half.