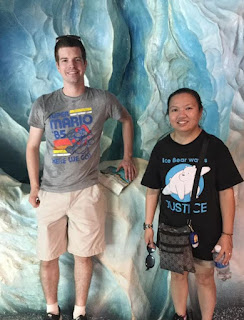 The only reason we really went all the way to the NC State Zoo was because of the polar bear. So we had to see him twice. Luckily he was in a much better spot than the first time we saw him earlier that day. 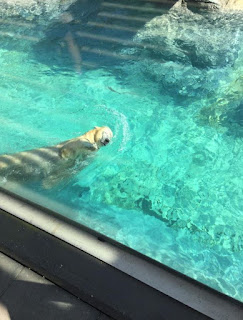 He was swimming in a large pool area. He loves the water, which I hope is really cold in the august sun. 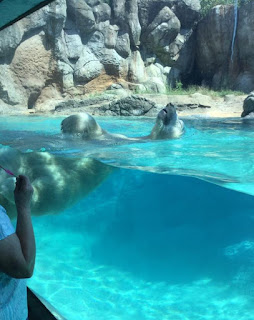 He had the same kind of technique. He would swim near the edge of the glass where you can't see him and then bounce off the glass. 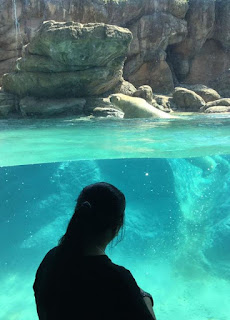 Then swim eventually back to the rock and start over-again. Almost like clock-work. 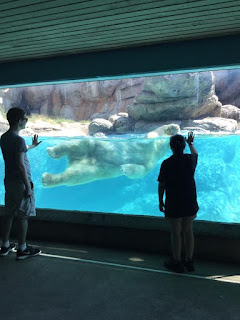 I am sure that the pool was refrigerated........otherwise the polar bear would not survive the heat.
Also his/her den would be frigidly cold.

I wonder did you find out about any breeding programmes the zoo has. Do they bring in a mate or send this bear off to another zoo?????
Cheers
Colin

I bet Daisy found it hard to leave, knowing how much she loves polar bears.

He's is a beauty!

Glad you saw him again!

I'm glad that you and Daisy got to see the polar bear in a better spot. I can watch them swimming for hours. They are magnificent animals.

I'm so pleased you got to see the Polar Bear again, I love that last photo.

The Polar Bear at the Ft. Worth Zoo did the same thing. He loved to show off. I'm not sure if he is still there. The enclosure was much too small I'm sure even though Ft. Worth used to be one of the best zoos in the country. Thanks for sharing.