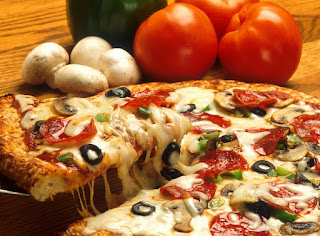 Domino's Pizza announced that a select market is going to have driver-less cars delivering pizzas to houses. I think the idea is pretty neat on a technological level, but I kind of wonder how well that will work out. The pizzas are suppose to be unlocked through a code given to the hungry person in a heated chamber, but I've had GPS lead me to the wrong houses sometimes and I wonder how well these cars would find mine. Also this also potentially puts people out of a job, which is not good for the economy on a large-scale.

Would you want pizza delivered like that?
Posted by Adam at 12:00 PM

Unbelievable! I am usually one to wait and see...

I agree with you 100%, technology is good but when it is putting people out of work we have gone too far.

I would be up for trying it, but yeah...it's not good when it takes away jobs though.

Would the car honk its horn to let the patrons know their pizza is at their front door? I suppose it's a better idea than drones delivering pizza. Splat!

Thank you NOT! I'd rather have a person deliver it to me door. I don't want to run out to some car with a code!

I'm curious to see how this will turn out.

I like talking to people, even when they're just delivering a pizza.

I like that the idea that they will be delivering wine to you too..

Well, I'm sure as heck not leaving a tip then if a real person isn't bringing me my food. I'm with Fundy Blue. Part of the appeal of delivery is having the food sent right to your door, not having to put on shoes and mess with some code to get your food. I've had enough problems with technology not working, I'd be pretty pissed if one of those deliveries had me fumbling with a messed up code or something, then my pizza would be cold or have to be redelivered. I am not feeling this service.