Things I Like: Ser Barristan Selmy (Game of Thrones) 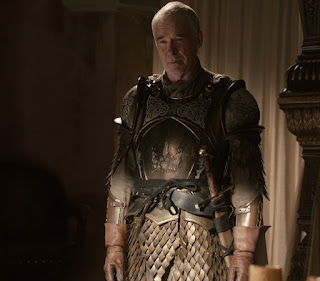 One of my favorite characters who I didn't appreciate quite as much at first, was Ser Barristan Selmy. While the books don't go into detail much about his early life, he entered a serious tourney at a very young age and was mocked until a Targaryen prince took pity on him and jousted him giving him the nick-name Barristan the Bold. He eventually became a member of the Kingsguard for Aegon V until Aerys II. He was defeated and almost died alongside Prince Rhaegar Targaryen at the Battle at the Trident. Roose Bolton advised Robert Baratheon to kill him, but instead Robert had him healed and placed him on his new Kingsguard. 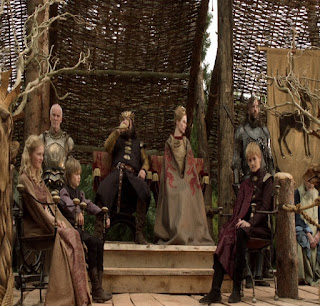 Since the Targaryen dynasty was over, and that he owed his life to King Robert, it made sense for him to be loyal to him as Lord Commander of the Kingsguard. Though he was incapable of keeping Robert alive when the king became too drunk to hunt. 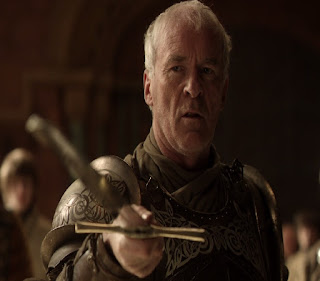 While it was part of Cersei's plan for Robert to perish, Joffrey and Cersei had no problems firing Ser Barristan from the Kingsguard for being "too old" to protect anyone. He was still one of the greatest swords ever (comparable to Ser Arthur Dayne) especially in a era where Kingsguard had mediocre members. I love his bold statement to Joffrey to melt his sword down and add it to the Iron Throne, declaring himself the boy-king's enemy. 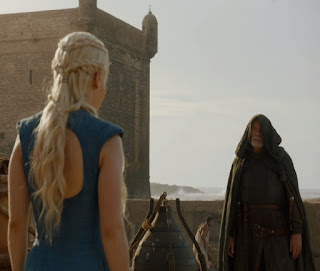 Most viewers kind of forget about him until he saves Queen Daenerys Stormborn in Essos, becoming sort-of the first member of her Queensguard, though her Queensguard wasn't nearly as properly organized as the official Kingsguard of Westeros. 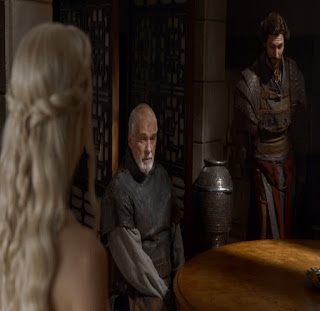 So Ser Barristan becomes more of a adviser than her protector. Who needs real protecting when you have three large dragons anyway? 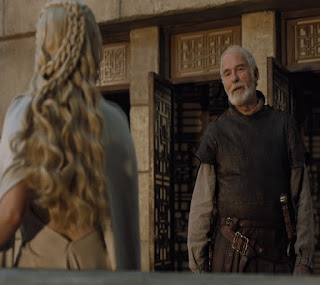 I liked how he gave Daenerys some insight of the true facts about her family since Viserys only told her the "good" and sometimes wrong parts. She accepted the fact that her father was really mad, but she was shocked to learned how gentle the fearsome Rhaegar was. 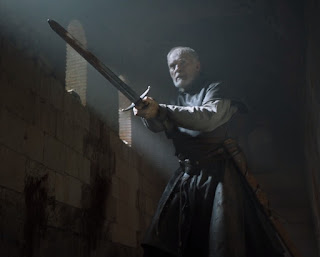 Then... he dies. He's still alive in the books, but dies in the show against Sons of the Harpy. It's unclear how long he'll make it in the books, but a lot of fans were blindsided by this one. I know the show-runners wanted to get rid of "unnecessary" characters, but why him?
Posted by Adam at 12:00 PM

There are so many characters in this story that I can see why his role was minimized.

You just never know who they'll kill off in this show.

I do love his character as well. I don't remember anymore much about the books coz it's been so long, but man....as the comment above shows, they do like killing off peeps on the show! By the end, no one will be left, except for Tyrion probably....

I liked Ser Barristan Selmy as a character too. I have to finish the books ~ I've only read the first five.