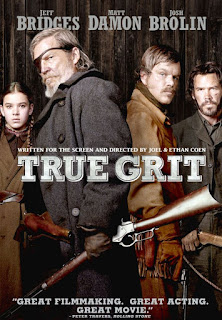 True Grit was a movie I had never even heard of for almost a decade. However I'm a big fan of Jeff Bridges and I heard about this one after researching some of his greatest roles. He was nominated for an Oscar for his role here, but lost to Colin Firth for his role in The King's Speech which is understandable. I learned that the movie is a remake of the 1969 film of the same name starring the Hollywood legend John Wayne. But both films are based on the 1968 novel of the same name by author Charles Portis. I had obviously never seen the original film or the novel, but all versions seemed to be worthy of praise, so were they? 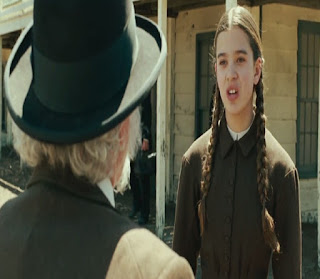 The story is about a young girl named Mattie Ross. Not quite a woman yet, but independent enough, she has to bear the burden of having her father die. Though her father was not killed by an accident nor disease but by a thug named Tom Chaney over a petty dispute. While the law in on Mattie Ross' side, the law is not very effective in the wild west as she soon learns. After getting a feeling that the sheriff will do nothing about it, she decides that she must take matters in her own hands if she is to see Tom Chaney to the hands of justice. Though she is a girl and not a warrior of any sort. She'll have to find someone with enough skill to track him down. 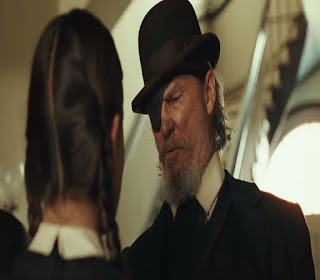 She then meets Rooster Cogburn, who is a Deputy U.S. Marshall who can also work for anyone with enough dough than just orders from higher-ups. While he gives Mattie Ross some resistance about the case, he eventually agrees to help her bring Tom Chaney in to face a judge. However Rooster Cogburn had no idea that Mattie Ross wanted to ride along with him to make sure he did his job correctly. However both won't be alone as a Texas Ranger named LaBoeuf is also after Chaney for the killing of a state-senator down in Texas. However all three with clash with each other for their own reasons, but they'll all have to work together if they want to complete their quest and walk away from it. 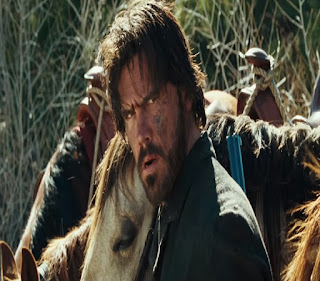 Overall True Grit was a just a tad worse than I had expected. Don't get me wrong though, I had really high hopes so things often don't live up to the hype as it's a high bar set. I was never one for Wild West stories though, but I'm sure it would appeal more to those who live and breath for tales of outlaws and cowboys. But the story is very good, and the characters have a lot of character development and chemistry with one another. Hailee Steinfeld was nominated for an Oscar for her role as the young but strong Mattie Ross, and I'm really surprised she lost.

I enjoyed both the old one and the remake.

It wasn't a favorite, but I favored the first to the second. The second came across as just a bit too dark for me.

I saw both the original and the remake. I prefer John Wayne as Rooster Cogburn but other than that, I thought all the actors in the remake were much, MUCH better than in the original.

The novel and both movies were really good, I have enjoyed all three, if I had to choose one movie over the other I would definitely go with the original starring John Wayne.

I thought the remake was better than the original.

I only saw the original which I remember that I enjoyed at the time. I thought it was one of the better John Wayne movies.