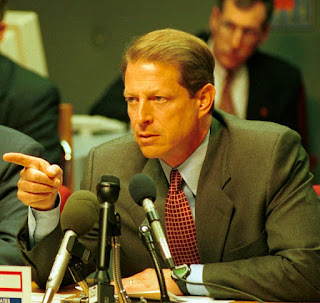 While he may have lost the biggest contest of being President of the United States, Al Gore has won many famous awards. He has earned a Nobel Peace Prize, a Grammy Award (Best Spoken Word Album), a Primetime Emmy, and he was the subject of the film An Inconvenient Truth which won two Oscar awards.
Posted by Adam at 12:00 AM

I really think he did such a great job with Inconvenient Truth!

I always liked him.

So many famous people have such amazing gifts that we don't always see. Hugs...RO

Sure can get all kinds of others. Must be proud of those golden naked men statues.

I didn't know he got the Nobel Peace Prize. Wow!

I'm afraid that now the honor of being a U.S.President is seriously tarnished.