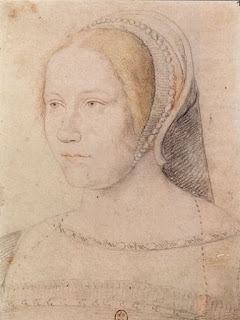 Diane de Poitiers was a French noblewoman who became the mistress of King Henry II of France. She was about twenty years his senior, but still remained a royal favorite and was considered the most powerful woman in France during Henry II's reign. When Henry II was mortally wounded in a joust, Queen Catherine de Medici assumed full control and Diane's power ceased from there. She was not allowed to see the king on his deathbed nor was she invited to the funeral.
Posted by Adam at 12:00 AM

The fun and games of the royals, geez.

YIKES! That had to be rough for his wife, I would think. Hugs...

Just shows there were strong women even when they were considered less than the royal dog. This type of behaviour really didn't change until recently among the royals

Wow. You never know who was really in charge do you?

So many interesting stories with these people.

A fascinating woman and a fascinating life ~ with a few similarities to the Charles-Diana-Camilla triangle.