Fact of the Day: Don King Dark Side 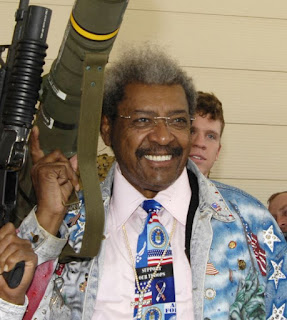 In a span of 13 years Boxing Bigwig Don King had killed two different people. One person in 1954 for trying to rob one of his establishments which was ruled as a "justifiable homicide" and in 1967 he stomped one of his employees to death over a small debt. For the 2nd, he served a few years in prison before being pardoned by Ohio Governor Jim Rhodes.
Posted by Adam at 12:00 AM

Email ThisBlogThis!Share to TwitterShare to FacebookShare to Pinterest
Labels: fact of the day, ohio, politics, republican

An awful person and an example, I think, of the privilege of fame. Pardoned for stomping an employee to death.

Pardoned for that? The Governor and him should both be in jail.

Because I'm into pop culture, I knew this about Don King, and more. Despite his colorful language while out in public, business dealings, criminal charges and more, his net worth is amazingly over $100 million. Happy Halloween! Hugs...RO

Just read that comment above. Holy Crap! His net worth is that much?!?!? WTF?

Wow he should've been in prison for a lot longer, murderer.

I was never a fan.

I've had several Canadian friends and family members tell me that they are no longer traveling to the USA because of the violence. Why should we be surprised at Don King, when as a nation, we shrug off and forget things like Sandy Hook or Las Vegas?

Didn't know anything about him. Until now. How do people like him get so popular?

he killed boxing too.

A truly despicable creature.
Wealth $100 million!!! And does that include "funny monies"????
Colin

What a piece of crap. Him and the governor that pardoned him. Must be nice to buy your way out of trouble.