Fact of the Day: Miyuki Ishikawa 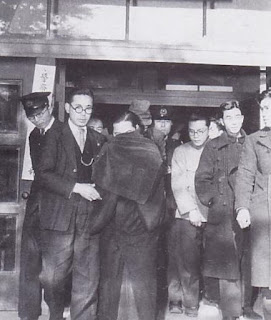 Miyuki Ishikawa was a Japanese midwife who was found to have murdered newborns to poor parents by neglect as what she "reasoned" as an "act of mercy". Nobody knows the exact number, but it's believed she had at least killed 103 newborns. Despite the serious crimes she committed, she only got a four-year prison sentence.
Posted by Adam at 12:00 AM

Wow, 108 babies and only 4 years? She should have been thrown in a hole.

I will never understand 'people' like her... Awful.
Also I don't understand how it happened that she got four-year prison... probably she was very rich and powerful, but it's weaird anyway.

Holy moly! I never heard of this person but she should have been locked away and the key thrown away or executed actually. It reminds me of the nurses who get rid of older people thinking they are doing the right thing..ghastly!

OMGOSH-Can you imagine? I think there is a place for her beyond this world where she will "pay" for what she did. Awful!!!!

Oh my gosh...that is awful!

This is so incredible! 4 years? That's all? Neglect? What does that mean anyway?

not giving them anything to eat or drink, I suppose.

I often think of Celine ~ 14th child of very poor parents. No one should play God.