Fact of the Day: Olga of Kiev 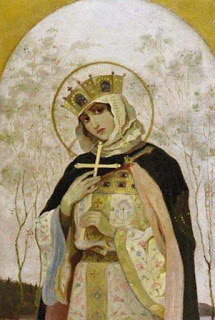 Olga of Kiev was wife of Igor of Kiev and ruled as regent until her son reached maturity. A tribe of Drevlians were responsible for her husband's death. The tribe tried to their best to get Olga to marry someone from the Drevlians so they could control Kievan Rus (part of modern day Belarus, Ukraine, Russia, other Slavic nations) through marriage. She apparently got revenge on multiple occasions as she buried Drevlians alive and locked some in a bathhouse and set it on fire. She is a saint in the Orthodox and Catholic church for spreading Christianity in her country.
Posted by Adam at 12:00 AM

Email ThisBlogThis!Share to TwitterShare to FacebookShare to Pinterest
Labels: fact of the day, russia, Ukraine

Wow this is a really shocking story

Sure sounds like a saint. Burn them in the poo house.

Man...these Europeans really know how to do revenge right....

Doesn't sound very saintly to me.

Wow, history is interesting she was a powerful lady.

A murderer becomes a saint? Interesting.

I'd let her loose in that White Building on Penn. Avenue, Washington and she'd be sainted by me again!
Colin