Fact of the Day: Plague of Justinian 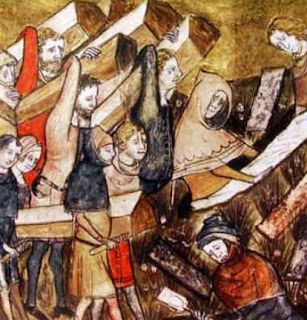 Plague of Justinian was a outbreak of bubonic plague that affected the Eastern Roman Empire and most of the coast cities in the Mediterranean Sea during the years 541-542 which was long before The Black Death in Europe's middle ages. While not as severe as the Black Death, millions did die, and even the Byzantine Emperor Justinian I had the plague but he was treated and survived it.
Posted by Adam at 12:00 AM

Email ThisBlogThis!Share to TwitterShare to FacebookShare to Pinterest
Labels: fact of the day, Italy, Rome, turkey

He survived and he still gets a plague named after him. Doesn’t seem fair.

Weird how they named it after him.

That must have been very unusual for the time--to survive when you did get the plague. We don't realize how lucky we are with modern medicine and diagnoses. Diana

I wonder what the treatment was.

The elite weren't usually spared from the plague so this is interesting.

This is quite interesting.

I'm glad that I live now. What a terrible time that must have been!