Fact of the Day: Prince Carlos of Spain 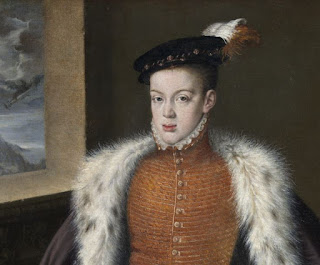 Carlos, Prince of Asturias was the heir apparent of King Phillip II of Spain. As a member of the House of Habsburg, Carlos's parents King Phillip II and Maria Manuela of Portugal were so closely related cousins that they were about the same genetically as literal half-siblings. Thus Carlos suffered from physical and mental problems from being so badly inbred. He was found to be ugly, unlikable, and also apparently enjoyed inflicting harm on others like making a shoemaker eat a pair of shoes that he found unsatisfactory. Even King Phillip II had lost toleration for his son and had him imprisoned due to his mental instability. Carlos died not long afterwards which made many suspect that King Phillip had his own son murdered.
Posted by Adam at 12:00 AM

Eat a pair of shoes? Damn, inbreeding should never be done.

How sad the whole situation was.

Oh wow. I guess back then they didn't know...

Thanks for this one. I didn't know about Phillip II's son.