Fact of the Day: Prince Edward and Joan of Kent 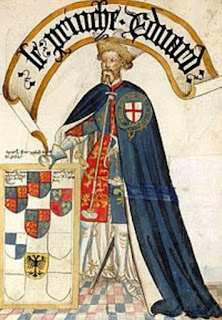 Edward, the Black Prince (name derived from the color of his armor) despite being heir apparent of King Edward III, did not have a very traditional marriage. Instead of marrying a foreign princess (to establish a political alliance) he married his cousin Joan of Kent who not only was older (two years) but she was married twice with one husband still alive. The Catholic Church and King Edward III approved the marriage despite the conditions and Joan only produced one child for Prince Edward when she was almost forty. Their son took the throne as Richard II after the death of his grandfather as Prince Edward had died before Edward III.
Posted by Adam at 12:00 AM

Keeping it all in the family

You certainly have a keen interest in British royalty history. As always interesting posts.

The royal bed got quite a workout in days of yore.

Joan of Kent had quite a history! Thanks for sending me to find out more!

Joan of Kent was a tad batshit