Fact of the Day: Service Games 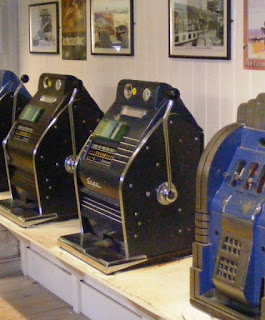 While Sega became well-known in the 1990's as a Japanese company that made the Sega Genesis console (Mega-Drive outside the USA) and the Sonic the Hedgehog series, Sega originated as an American company called Standard Games based first in Hawaii in 1940. Their first games were really slot machines for the U.S. military which eventually moved to being based in Japan and the name changed to Service Games which Sega get its name from. .
Posted by Adam at 12:00 AM

Email ThisBlogThis!Share to TwitterShare to FacebookShare to Pinterest
Labels: fact of the day, hawaii, japan, Sega

My son actually had a Sega game as a kid, and wishes he still had it. I had no idea that the name actually started out as far back as 140. Hugs...

Never knew that. From gambling to sucking kids out of quarters.

And yet another, “I had no idea” from me. Thanks!

Hi! Thanks for your information!

Oooooo...cool to know. Will definitely keep this mind for conversations with gamers:D

What an interesting factoid!

That is quite interesting!

That is a fun thing to know!

Fun to know! I'm guilty of playing the slots sometimes, but not Sega! Have a good one!

Many thanks for this information ...