Fact of the Day: Stone of Scone 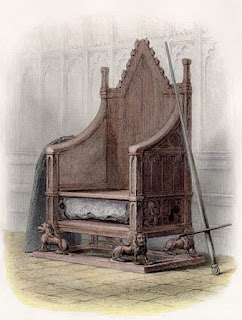 The Stone of Scone is a block of red sandstone used in the coronation of Scottish monarchs. King Edward I of England took it as a spoil of war and used it to claim his right as "Lord Paramount" of Scotland which was a claim that he was rightfully above Scotland's king.
Posted by Adam at 12:00 AM

And, when you see it, it's a very unimpressive "rock."

Got to love humanity fascinations with rocks

England finally returned it to Scotland just a few years ago. However, Scotland has promised to loan it temporarily back to England for use in the next coronation.

That was a bold move on his part.

It is indeed one awesome looking chair. Made of stone though?
Guess that's not the point of why he claimed it though...haha.

Have you watched the movie Stone of Destiny? It is based on true events about the theft of the Stone of Scone in 1950. I enjoyed the movie.

You always share the most interesting things. I've heard of this before but had forgotten about it.

I knew about the Stone of Scone and its use in the coronation of Scottish and English monarchs. I didn't know about its mythical history (or perhaps I forgot) until your post made me curious and I went looking. Thanks!

First time I hear of this. That's interesting