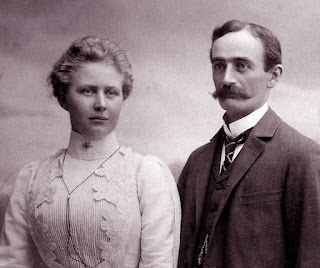 Donald Trump's grandfather Friedrich Trump (his name anglicized as Fredrick Trump) was from the Kingdom of Bavaria (modern-day Germany) and he moved to the United States as a young man. Making a fortune through the gold rush, restaurants, and boarding houses, Friedrich Trump moved back to Bavaria and married. However he had to move back to America after the Bavarian government figured out the only reason he emigrated to the United States originally was to avoid his mandatory military service.
Posted by Adam at 12:00 AM

Not even his riches could keep him there, can you guys ship Trump back now?

There are similarities...smart rich men.

Too bad he didn't stay in Bavaria.

So the apples don't fall far from the tree.

So avoidance of military service runs in family, Trump???

I'm bloody sure that Angela Merkel is very pleased that the Grand dad to the present occupant (for how long now as the screws
tighten !) is out of Germany. But I bet she is not too happy with where grandson Turnip Top is now "for the time being".

With the latest news on that 2016 election result, I reckon the raucous laughs rocking the walls of the Kremlin should be heard across the Atlantic!

Cheers
Colin
PS: I hope you realise Adam that these 'Turnip Top Tit Bits" must be causing severe stress to your previous white, bigoted, bible bashing doyens of "respectability" (????).
followers

The fruit doesn't fall far from the tree...

Escaped military service...typical. Bavaria is still a province of Germany and a beautiful one at that with all the mountains. You can see that present Trump got his looks from his grandmother