Fact of the Day: Tyrant Over the Congo 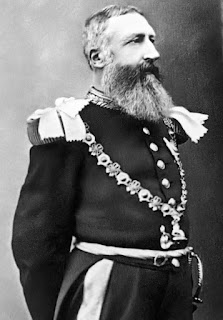 King Leopold II was King of Belgium but his most infamous moves where actually in the Congo than his own country. He eventually gained control of the African country and established the Congo Free State by telling other European powers it was to help improve the lives of the people living there. Nothing was further from the truth as millions died under his thumb, many were also put under forced-labor so he could profit off Congo's resources.
Posted by Adam at 12:00 AM

Email ThisBlogThis!Share to TwitterShare to FacebookShare to Pinterest
Labels: Belgium, congo, fact of the day

That is so disgusting!

Alas, much of the continent suffered the same fate.

And the circle goes round and round.

His name lives in infamy.

A douchebag and then some

Sad to say the world has lots of people like him.

What a horrible person.

I think the commentators before they put fingers to keyboards
should do some checking on FACTS!
The now Democratic Republic of Congo is no more democratic than North Korea.
Poverty reigns supreme in a richly endowed country and corruption is rife!
What about the FORCED child soldiers??????????

I reckon you'll find far more interesting things about Leopold 11
than his colonisation of this region of Africa when the whole bloody continent was up for GRABS.
Maybe you Yanks have forgotten your efforts against the native Indian tribes of America?????
At least here in Australia we are doing something to rectify our past with the aboriginals, which compared to the slaughter in the USA of the Indian tribes, really could be compared to a pin point (Australia) to a huge basketball (USA).

Consensus seems to be that Leopold II was responsible for about 10,000,000 Congolese. His extensive public works in Belgium don't make up for his activities in Africa.