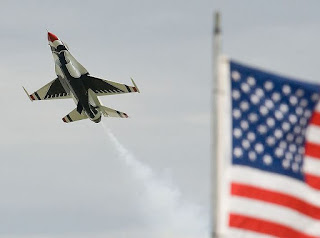 George Carlin truly knew what was the truth about things people did. Praying for war is like praying for football games, if both sides believe in God, who wins? The ones who pray the most? Like the Crusades, it seemed God didn't have a favorite as the next victory was passed around like a hot potato between opposing sides. You can't show me one country on Earth that has been 100% victorious in war. In the Vietnam War, the communists (who were mostly atheist or at least non-Christian) won that war. Where was God then for the Christians that fought there?
Posted by Adam at 12:00 PM

Ah---the age-old question of "where is God in a given situation"....perplexing to all of us, I think.
Hope you and Daisy have a wonderful Sunday, Adam. Hugs- Diana

That's an interesting question. I'm Agnostic so I don't actually think god has anything to do with it.

That is an interesting quote!

Have you ever read "The War Prayer" by Mark Twain? It's another classic that shows the true nature of prayer in wartime.

The most powerful performance I've ever seen of "The War Prayer" is a 35 year old PBS production starring Edward Herrmann -- his performance is simply brilliant. Here's a YouTube link -- unfortunately the performance is on videotape so it's kind of fuzzy visually but still powerful despite that:

And here's an updated version starring Jeremy Sisto. Not quite as powerful but perhaps more directly relatable to a modern audience:

Great quote! I always cringe when Christians say God is on our side or God is punishing us for some evil we're committing. As for games and such ~ The idea that God would care is laughable.