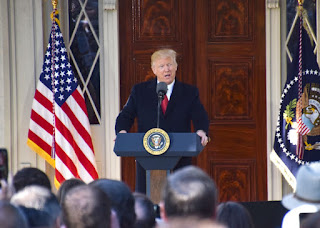 "A lie travels around the globe while the truth is putting on its shoes."

In the digital age of information, something can happen from the other side of the world and we know within minutes if not seconds of it happening. However it's very common (especially at first) for the first wave of information to be inaccurate. Then you have the total liars who distort the truth to further a purpose, often political. Fake news was rampant during the 2016 election season, but it's one thing for trolls to do such a thing on social media. It's another thing when the President of the United States lies constantly and has the audacity to call the media fake.
Posted by Adam at 3:54 PM

Turnip Top wouldn't know the truth if it hit him in his "MOOCH".
How his Chief of White House Staff, Secretaries of Defense and State
tolerate him is one of the mysteries of life (US of course style!).
These three men are lucky to still hair on top of their heads!

We here in Australia had on the weekend an hour interview by one of our top political reporters with Hillary Clinton.
Very interesting..............it should have been shown in the USA but I bet it doesn't see the light of day in the USA!
Cheers
Colin

Ooops - Should read "STILL HAVE HAIR on top of their heads!
I refer to the trio who TRY to keep "looney lips and Twitter
King" in check.
Colin

It's incredible what comes out of his mouth sometimes.

Trump is unfit to serve as president and is putting us all in danger.

he lies about lying ..

I'm afraid to turn on the tv in the morning. I don't know what he is going to say next or what cascade of events will happen as a result.