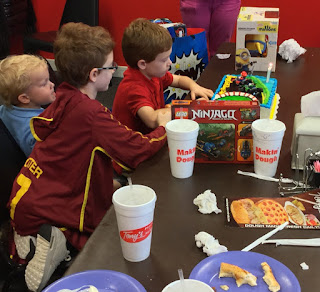 My nephew Mr. C recently turned seven, and he had his birthday again at a little local place called Tony's Pizza. They have a party room, so my brother says it's one of the few places they can really do it at. He had a Mario Kart cake as both brothers are big fans of the game Mario Kart 8 on WiiU. Daisy and I got him two Minion presents. One is plastic and has some of kind of music to it. Another is just a stuffed-animal version of the Minion Bob. 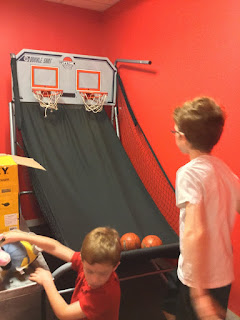 After most of the guests left, my brother said my nephews were playing basketball in the back. The place doesn't have an arcade so I was wondering. Then it made sense once I saw it. They wanted me to play but they climbed on the sides of the basketball game and put their hands over the goal in a effort to keep the basketball from landing.
Posted by Adam at 5:00 PM

Who ISN'T a Minions fan?

Seven is such a fun age. I bet they had a great time. Good job on the gifts.

Happy Birthday to Mr.C ... seven is a great age to be!

Happy Birthday Mr. C. You guys did a great job with the gifts. I have no earthly clue what to get the young people these days.(lol) Hugs...RO

He's growing up so fast! Happy birthday to him.

Happy Birthday Mr. C! Minions and Mario Kart? Sounds like the perfect birthday to me!

Looks like a fun party. Happy Birthday to your nephew!

our nieces and nephews are growing up fast! Happy Birthday, Mr. C!

Mr. C's 7th Birthday Party was such a blast. I will surely be considering all these things for my son’s DIY birthday bash. Well, lately I am super busy in finding inexpensive event venue for kids’ celebrations. The budget is low so I wonder if you know about any good locations.