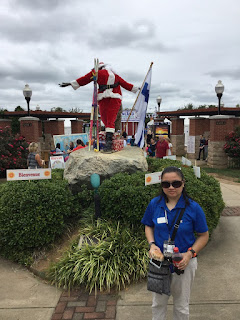 Every year our city has an International Festival, and this year the honored country was Finland. The Finnish people at the festival decorated the statue in Santa gear (they mentioned that Santa doesn't live in the North Pole in Finnish tradition) holding the flag of Finland. 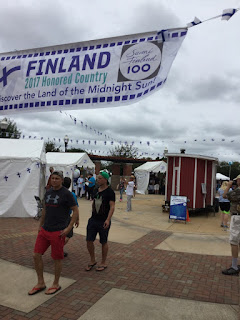 The honored country essentially gets the big area to the park for themselves. Many booths with many different topics. All the other countries only get one booth. 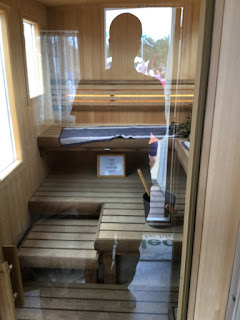 There usually is a "fun" prop in the middle. Finland chose a mobile sauna. Obviously you couldn't really use it like its intended but you could walk in there and feel what it's like. 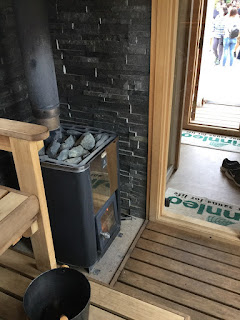 I have to admit, it's pretty darn hot in there. They mentioned that there's almost as many saunas as there are people in Finland. In America, I doubt there's even one for every thousand folks. I can see why they are popular in Finland. For a place that sees so much cold weather, one of these probalby would be a great escape.
Posted by Adam at 5:00 PM

I think that's nice to hold an International Festival ... sounds and look good.

I've enjoyed a few saunas, but I can't handle the heat too long.

That's interesting Adan 0 wonder where Santa lives according to the Finnish people!

Sounds like a nice festival. I'm not a fan of saunas but some people really like them.

How cool that Spartanburg honored Finland! I love saunas, but I can only handle them four, maybe five minutes max. It looks like you and Daisy had another fun day.

My husband installed a steam shower and I can only go for about 5 minutes. I don't think I'd use a sauna very often.

We have a large Finnish community here in our town on the Mediterranean Sea. Lots of backyard saunas!

Traditionally, you're supposed to take a hot sauna and then run outside to roll around nekkid in the snow, I believe.