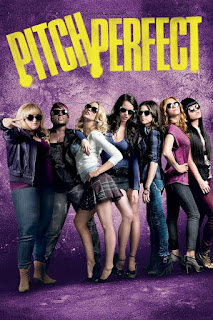 I've heard of Pitch Perfect for quite a few years now. I frankly ignored it when it first came out and for Universal Pictures, I don't think any of them ever expected this movie to be the box office sleeper hit that it was. Now granted, some box office hits cater to certain demographics and Pitch Perfect does seem to hold an appeal to women mostly, but I heard of the people who liked it and saw a few memes based on the films. I try to watch anything culturally relevant (especially if I'm sure my wife would like it) and a lot of times I am surprised by what I see. Was that true for Pitch Perfect? 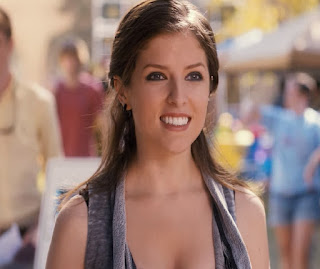 The story is about Beca Mitchell who really wants to be a DJ in Los Angeles. Her father, a college professor insists she start school first. She doesn't seem to like her first days of  Barden University very well. For one, her roommate Kimmy-Jin doesn't like her at all, and doesn't really speak to her either. Her dad makes her a bargain, if she joins one college club and hates it by the end of the school year, he will help her move and stay in Los Angeles. But she has to fulfill her end of the deal, so she ends up being recruited by a singing club called the Barden Bellas after it's co-leader Chloe Beale hears her voice. 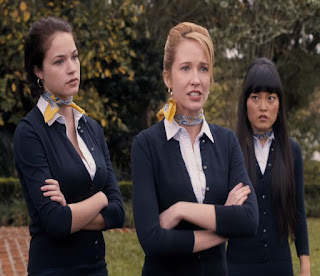 However The Bellas are not exactly the most prestigious group. Their uptight de-facto dictator of a co-leader Aubrey Posen lost a major contest for the group when she vomited on the audience. Instead of resigning, she still takes a strict command. Her ultimate goal is to defeat the all-male group The Treblemakers in a competition. However with dumb leadership and rather strange choices for cast-members will they even be allowed to compete? 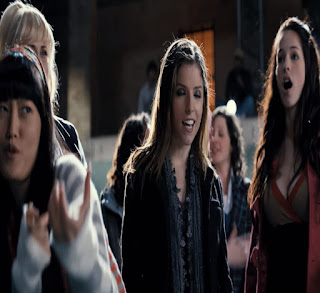 Overall my reaction to Pitch Perfect was mixed. Some of the characters are likable, others are repulsive in different ways, and the music numbers never really impressed me except in very few moments. Pretty much all the songs are from popular music instead of original works (while not 100% original, Anna Kendrick's version of Cups/When I'm Gone was popularized by the movie) so that's good and bad. But the movie has a lot dark humor in it so that's good. So I found it really easy to hate and hard to hate in ways. My wife loved the movie though so she really wants to see the sequel.

I have movies that I love/hate, too, Adam. I have never seen this one and not so sure I would like it. I do like dark humor though- Diana

This is not the type of movie I normally like but if it's on tv I will watch it again and again...I love the final performance the best. The sequel wasn't as good but worth a watch.

ignore the sequel, i liked the first one but only managed 20 minutes of the sequel before i turned it off :/

I loved this movie..

Although nothing special I enjoyed the movie, but it's not one I would watch over and over. In fact it was on one of the TV channels last night and I didn't watch. Thanks for your visit to my blog Adam.

I really liked this movie. Laughed a few times too, which is rare for me to do during a film. I agree about not seeing the sequel. Not too good. I just heard there will be a part 3 coming out and I probably won't watch that one at all.