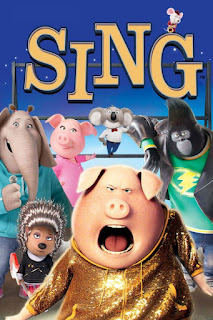 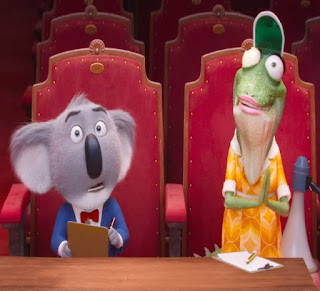 The central character of Sing is a koala named Buster Moon. As a child, Buster Moon saw his first musical and fell in love with the theater. He eventually becomes the owner of the famous theater but he wasn't very good at managing the place. At this point in his career, almost nobody wants to see shows at his theater. He also becomes a bad businessman as he tries to get out of giving stage-workers proper compensation, doesn't take care of his power bill, and dodges phone calls and in-person talks from very angry folks. However with his theater at rock bottom, he decides to hold a new contest. 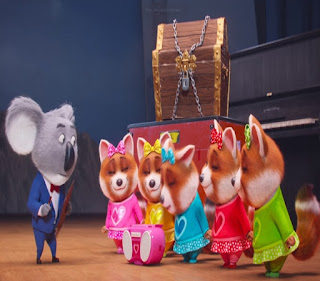 Which is a singing competition, and due to a clerical error by his assistant Miss Crawley, the people that see the flyers thinks the grand prize is far more than it really is. Droves of wannabe-singers wait outside in the side-walk for their chance at stardom. Most of the better singers, are characters who do other things for a living. You have a stay-at-home mom Pig, a teenage gorilla with a low-life father, an arrogant white mouse, a very shy elephant, and many others. However it will be up to Buster Moon to save his theater and he has the world against him. 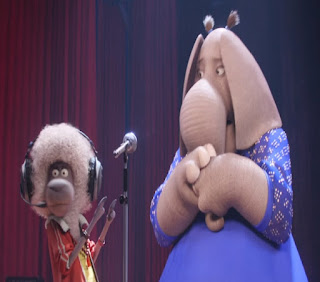 Overall Sing was about what I expected, nothing that amazing, but still a very likable film that does appeal to many. It's more of "smart" animation that won't scare children, but won't bore their parents either. The singing and music scenes are actually pretty darn good and they use mostly songs from popular music instead of original songs made just for the film. The story could of been a little better, but a sequel is due in 2020 and I won't mind seeing it. However I'll probably be watching Sing 2 at home than at the movies.

I've been meaning t watch this, it looks funny.

I watched "The Secret Life of Pets" and honestly I didn't like it, so I didn't watch "Sing" yet. Maybe one day! :)

Thanks for your reviews which I always feel are worth reading, Adam

My granddaughter who is very discriminating said she loved Sing. Now that you've given it a good mark, I'll watch it too.

I liked it, but didn't love it. It was only worth watching once.

Another one to look for on cable free movies. I always appreciate your thorough reviews!