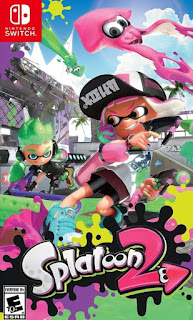 Splatoon 2 is something I knew I'd eventually play and it didn't take me long after its release for me to get it. I remember playing a demo at Target of the original game on WiiU and not quite getting the point but I was only there a few minutes so I wasn't sure if that was really the main core of the game or not. It's extremely popular and really worked out for Nintendo and at least they have made fans a real sequel instead of a re-release of a WiiU game like they did for Mario Kart 8 and Pokken Tournament. However a mere demo is really only there for you to get used to the controls, the true meat of the game actually lies within the frantic online multiplayer the Splatoon 2 offers to gamers. 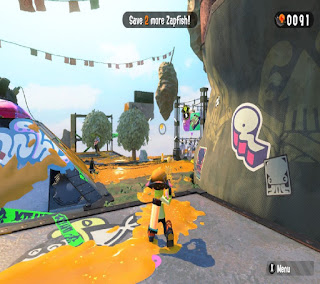 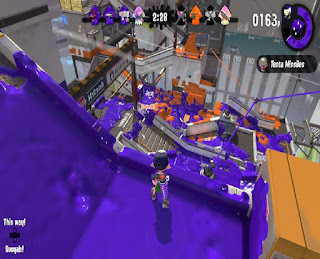 The game-play is almost like paintball but instead it's "ink" and there are many types of weapons to use. Unlike other shooting games, the point is not really to kill your foes (though it's possible and often needed) but to cover as much of the map with your team's colored ink. There's also other modes online that mixes it up a little. There's a king-of-the-hill style game where you have to bring a item as close as you can into enemy territory. Another has a moving mini-tower that you must control and make it glide as far as you can against the other team. Another mode has just one area of the map that you must control making things very chaotic but very fun. You also level up like an RPG so you can obtain better weapons and clothing that gives you minor power-ups. 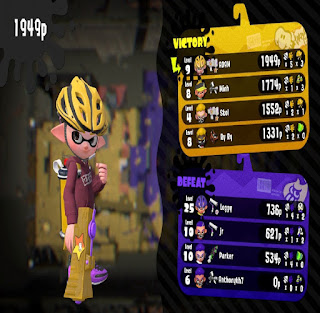 But overall I really liked Splatoon 2 even if it's my first entry to the series. The multiplayer mode is one of funnest I've seen in quite some time as only Halo, Mario Kart, Super Smash Bros. and just a few others had me just as impressed from beginning to "end". Nintendo created yet another brilliant franchise and hopefully they'll be able to make a better single player campaign with the eventual third game comes to be. My only beef with the multiplayer mode is that the game in the regular turf war battles lumps almost all levels together. It's not really a fair match if level 2 players are up against people that are level 20 or even level 40.

The thing I can't stand about either of the Splatoon games is the lack of local splitscreen multiplayer. I do a lot of online gaming, but the Switch is something the wife and I play together. Splatoon is something we can't play together, so it's not something I intend on owning, regardless of how fun it is.

My niece and nephew love this game! They play it all the time, they have beaten it too haha.