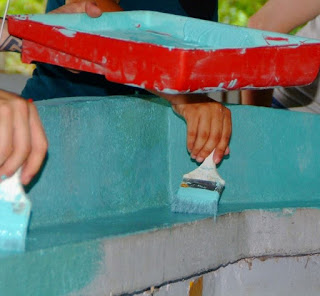 Working at home improvement place one year, we had a co-worker named Haley who was a seasonal cashier up-front. She was mildly cute, but she was dumb as rocks, I'm not even lying. She would barely understand basic things and it would be up the point everyone would be either laughing about it or doing a face-palm. She went up to me one day and said "How do you make the paint?" She let me know she thought all the cans were empty and that the paint came straight out of the machine. In reality the majority of the paint is in the can and we just use a bit or a lot of tint to change it into the color the person wants. I explained that to her but still she didn't really understand. A few months later she quit and left for whatever else. 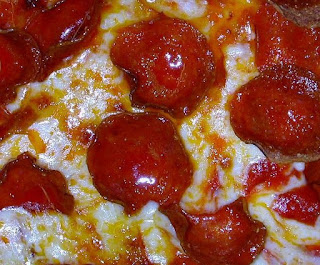 We stayed friends on social media for at least a year after that, but one day I realized she had unfriended me which is a big pet peeve of mine as I have "friends" that I don't even like very much, so for a person to do that shows they really don't like me, or at least that's what I perceive. Well... the other week I was at Sbarro at the mall and she was working there. She remembered who I was and it was pretty awkward, though I was polite but I have very little toleration for stuff like that so I was a little bitter. Not surprisingly, the guy working with her there showed his frustration when she kept screwing things up like burning pizza. My pizza that day was pretty low-par.
Posted by Adam at 12:00 PM

Too funny. How will this poor girl make it in life? lol
Reminds of my first job (fast food joint), we had a co-worker who was so nice but so slow...there was a song out at the time called 'Waiting for Wednesday' but we would sing it using his name 'Waiting for Wesley'.

I've had that happen on fb too and always wonder what I did to make them unfriend me. I am pretty opinionated and do post weird shit so that's probably why. lol

Haha oh man! I tend to get annoyed when people unfriend me as well!

I don't keep up with Facebook so i don't know how many people have unfriended me, but I've lost five followers lately and that always hurts.

I quit using FB after I got hacked.
I do wonder when someone unfollows me on the blog.

Someone not worth bothering about, Adam.
FB is bloody dangerous.
Colin

Not someone you should worry about

I hate being unfriended too, Adam! As a teacher I had students I knew would struggle in life because they had a wide variety of challenges including being of lower intelligence or not having much common sense. Some rose above it all wonderfully. I hope this person finds her niche.

You know what they say. When you get unfriended, it's like the trash is taking itself out. I don't fret about lost friends, especially if we don't communicate outside of social media.

I don’t read anything into many “unfriends.” I do it myself when I realize many people only friend me to increase their numbers. Anyway, did you really want to be her friend? She can’t make paint or pizza.