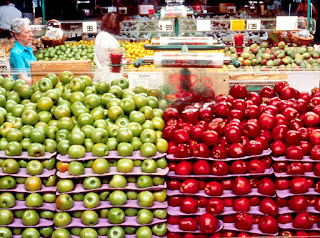 For most of my supermarket career, I worked for a chain that was rather high-end. Which was good for me, as that filters out a lot of weirdos who would rather be at Wal-Mart. So much of the clientele were nice, respectful, and polite. There weren't many people I remember being that bad, but like anything in retail you eventually find the unreasonable folks. 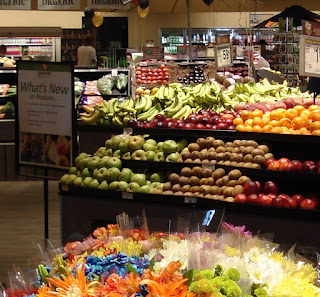 During a winter snow-storm, our trucks came from Atlanta, and at the time Atlanta was pretty much frozen-over. We had enough fruits and vegetables, but we ran out of the plastic bags people often use to separate them from the rest of their groceries. I explained this to an older gentleman and he said "that's what they all say!" and he ran off with a snooty attitude. One of those moments where you wish you could say what you were thinking in your head.
Posted by Adam at 12:00 PM

When I worked retail, I had to stop myself so many times from saying what I was thinking! haha!

I often times find myself biting my tongue with people and resisting the urge to say what I really think.

Very cool that you were able to maintain your calm demeanor. Bad weather and supermarkets can sometimes be a toxic combination, right? (lol) Hugs...

Funny thing about Walmart. When we were in some parts of the country, the Walmart did seem to have people who weren't quite friendly or polite. At our Walmart here in Hawaii though, everybody goes there. Maybe not Oprah or the rich celebrities, but everybody else, I think. Then again, my sister-in-law worked for Walmart and said the managers didn't treat their workers well and she caught a lot of shop lifters. Sigh...

You lucked out wherever you live. My friends worked in the up scale supermarket when we were in high school and college and the vast majority of the ]wealthy] people who shopped there were some of the nastiest and rudest people I've ever heard of.

Oooohhhh retail. I'm still baffled as to why the people who work so hard and put up with the most BS get paid next to nothing. I do not miss retail one bit.

Next time send people like him to my boot camp.

You can't reason with everyone!

I worked for a grocery store when I was going to High school, I remember many times having to smile and nod my head while a customer ranted over something beyond my control, I guess some things never change.

Well done on keeping your cool ...

If he wants to get pissy about it, tell him to bring his own damn bags. I do it and never have an issue getting my produce home in tact.

Haha! I worked in a public service job too ~ Constantly had to bite my tongue!