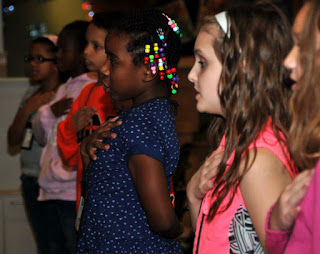 Unless you're living under a rock, a hot topic debate is on whether or not NFL players should kneel for the national anthem or not. This has spread to public schools where many students especially African-American children who understand why players are kneeling (to protest racial injustice and police brutality) and wish to do the same. Now I've been seeing stories of certain school districts requiring students to stand for the pledge of allegiance with some even claiming it is "the law" when it's actually their right to protest which has been protected by the Supreme Court long before most of us we were even born. It pains me to see this faux-patriotism by right-wingers who are angry for a different reason. Like someone said before, Rosa Park wasn't protesting public transportation, she was protesting racism. But I will say, a country that doesn't respect constitutional and human rights (and hopefully we will remain a free country, but under President Cheeto, who knows?) is not a country that is worth giving any allegiance to.
Posted by Adam at 12:00 PM

they didn't even have the teams come out for the national anthem till 2009 when the government started giving millions to the nfl to make it a big national we love everything american show...fuckers.

I remember when I was in school we had to stand and place our hands over our hearts every morning during the pledge. If we didn't we got detention.

It is a terrible state of affairs to be continually subjected to seeing on TV broadcasts...........and that is on Australian TV reports, I suppose Canada, Mexico, and the rest of the World have to watch these protests also.
Great to see the 5 living Presidents in unison against the
"BUFFOON " elected by your strange voting college.
Impeach the bastard and for good measure the VP also as he is no better...........nothing worse than a turn-coat Catholic as Pense is.
My goodness JACKIESUE......you have kicked a goal! ha ha.
Colin

News media does not make things any beterr either. Our country is going to the dogs.

I'd be tempted to kneel with my students. I would never berate them for kneeling, although I would likely stand for the pledge.