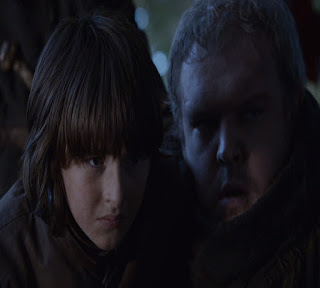 For the first few seasons, we just don't realize how much we really cared for Hodor. Granted he doesn't do much besides carry Bran around, say Hodor, and gets hurt by people much smaller than him. Bran could warg into his body and makes him useful. 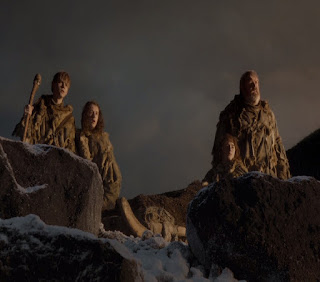 Unlike Jojen Reed, Hodor makes it to meet the Three-Eyed Raven with Bran Stark and Meera Reed. 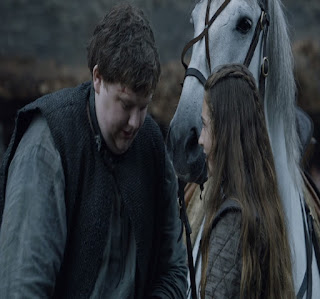 Through magic flash-backs we learn that he was a simple stable boy named Wylis (Walder in the books, though Wylis might just be a nick-name on Walder or just an attempt to avoid confusion with Walder Frey) who actually speaks real words at Winterfell with the young Ned, Lyanna, and Benjen Stark. 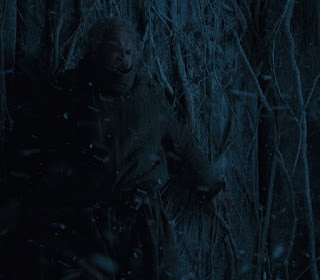 Then we learn that Hodor is short for Hold the Door as the young Wylis got warged into some crazy time loop which made him experience his horrible death inside his own mind which forever warped him. Now that's sad!
Posted by Adam at 12:00 PM

I think I am the only person in the world that hasn't seen Game of Thrones.

Very sad. I thought he was a good character.

I didn't know all that. I've only watched a couple of episodes.

I have not gotten hooked on that show. I think it comes on at a time point when I have other things going on.

It was an unforgettable moment when we learned the significance of Hodor's name.

Adam, would you happen to know if the book is any good?

Oh my word, yes, he is such a good character!

No you are not Theresa.
This show does not appeal to me on iota.
Colin

Hey, BG! My brother, one of my sisters, and I have each read most of the books (They are big books!) and think they are top notch. We three love fantasy and sci-fi. The series is one of my all time favorites. My other two sisters who are into contemporary fiction and anything but fantasy and sci-fi wouldn't get the GOT books at all. The books are more complicated than the tv series. Hopes this helps!