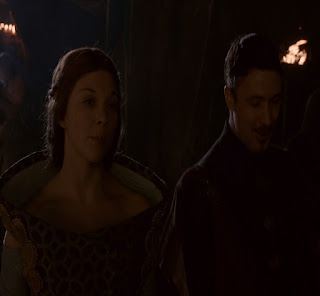 One of my favorite characters on Game of Thrones was Margaery Tyrell. Being the daughter of the one of the most powerful lords in Westeros, she gets married to King Renly Bartheon after he declares Cersei's children bastards and ignores that the fact that Stannis has more right to the Iron Throne. She would have been Queen then if Renly didn't play games and got assassinated by a weird shadow ghost. 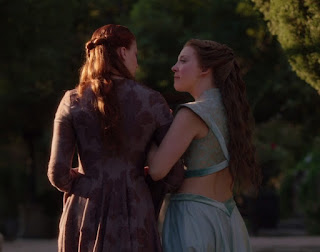 When House Tyrell allies with House Lannister to take down Stannis, Margaery is welcomed to King's Landing and becomes King Joffrey's new fiancee. The Tyrell women try to befriend Sansa Stark and almost set her free through marriage, but Tywin fixed that. 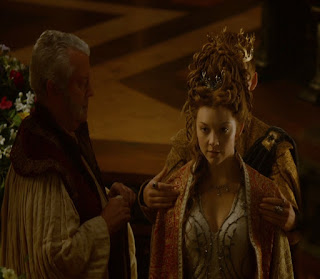 Joffrey seemed to be pretty happy with his new bride. But with a beautiful woman like Natalie Dormer, who wouldn't be? 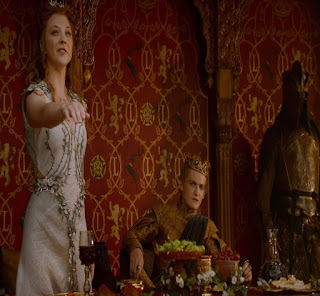 She's the new Queen for a few hours until Joffrey is poisoned by her grandma. Whoops! 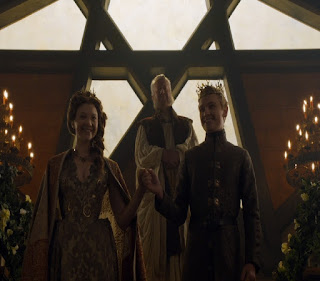 Which was a giant (and dangerous) plan for her to marry the much softer and kinder brother Tommen. In the show this also causes a huge age difference than in the books. While the show might of made Margeary in her late teen or early twenties, Dormer at the time was in her early 30's. They aged Tommen up to 16 as in the books he's only like 7 or 8 when he marries her when she's like 15 I think. 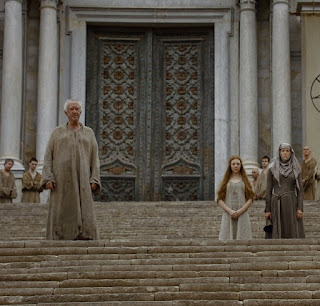 I really hated how she was treated by Cersei during the High Sparrow story-line. Despite her wealth, beauty, and intelligence, it took her forever to politically trick the High Sparrow to winning her own freedom. 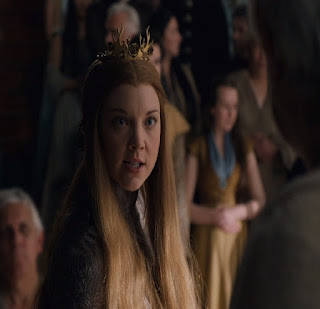 I was sad to see her go when Cersei blew up the Great Sept of Baelor which killed all of her enemies and a few "friends" and family members too. But to be fair, it would of been rather strange to see Daenerys Targaryen clash with her if Tommen and her both stayed alive.
Posted by Adam at 12:00 PM

TBH, in the books, Margaery was never a fave character of mine but in the TV series, I think Natalie Dormer did such a fantastic job portraying her that I ended up liking her.

Interesting. I haven't watched much of the show.

I haven't watched it though I know it's wildly popular.

It's a complicated yet satisfying plot.

I was very surprised when Cersei blew up the Great Sept of Baelor. I wasn't expecting that!

Poor Margaery couldn't catch a break when it came to husbands! I thought Natalie Dormer did a great job portraying her. The character I really dislike is Robin Arryn. So creepy. Wouldn't it be something if he ended up with the Iron throne!