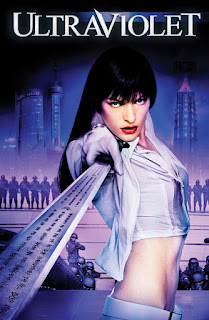 Ultraviolet is a movie I noticed back when it first came out over a decade ago now. The only reason I took notice was because of its lead star Milla Jovovich. She's been quite a few things now, but I suppose her most famous role is that of Leeloo de Sabat in The Fifth Element and of Alice in the Resident Evil (based on the video game series) movies though those movies were almost critically panned and even fans of the games weren't too thrilled with them especially as the series went on. Ultraviolet was a movie that critics hated with a passion, regular folks didn't like it much either, and at the box office it only made slightly more than its budget which doesn't make it a success at all. Could it have been really that bad? 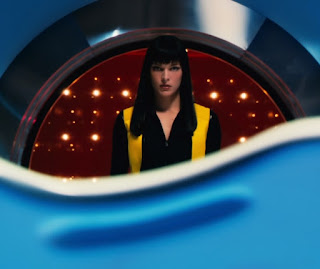 The movie is about a woman named Violet, who was a normal human until she gets a disease that makes her a hemophage, which gives her vampire-like symptoms. She has super-strength, a healing factor, and scary canine teeth. However all the people who are the semi-vampires only have a limited life-span, maybe to live fifteen more years at best. And that's if they are left alone, but the fascist government kill all of her kind on sight and there is no mercy since the disease is easily caught by another person.

She hears of a weapon that could be used to kill of her own kind. However the weapon is really a young boy named Six. She thinks he can be used to create a cure instead and takes him under her protection. However there are many out there wishing to stop her. So her super-powers better be enough to save the world and herself from death, either by enemies who want to kill her or the disease finally taking its toll on her body. Will the two create a better world or will they fall to a very bitter end? 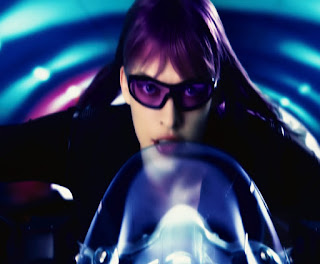 Overall Ultraviolet was a pretty terrible film. Violet is the ONLY interesting character and "interesting" is used generously here. The direction is horrid and you can almost understand none of the plot as it's not told very well. It's still a very pretty movie that uses great uses of color, but the story brings that down so much that it can't be redeemed. It's also a movie that has a lot of action scenes, but almost no signs of it after a fight is over to obtain a PG-13 rating. Milla Jovovich has been in a lot of horrible movies but this could possibly be the worst.

I understand now why I haven't heard about this movie. :D

For me it could have been better but it was ok.