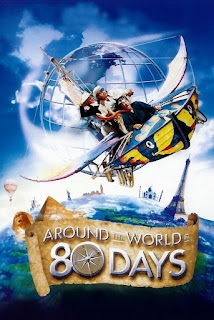 Around the World in 80 Days is not a movie I remember coming out around 2004. It's one of several (though as of 2017, the most recent) adaptations of the Jules Verne's novel of the same name. The only person in the cast I seemed to care about was Jackie Chan, though I later saw Arnold Schwarzenegger and Mark Addy (who later played Robert Baratheon on Game of Thrones) in the movie as well. 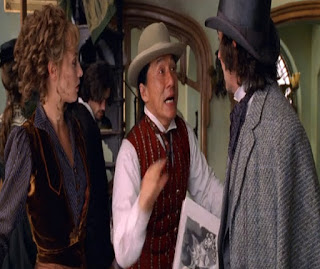 The movie starts with a Chinese martial arts expert named Lau Xing being chased by the English police after getting back a jade Buddha that was taken from his village in China. While trying to evade them, he ends up meeting semi-famous (and a little kooky) inventor Phileas Fogg who hires him as his new valet. Badly making up a story, Lau Xing claims his name is Jean Passepartout and that he is French-Chinese. Not long after Phileas Fogg accepts a challenge from other scientists that he can indeed travel across the world in eighty days. Lord Kelvin even offers his post but if Fogg loses then he can never invent again. 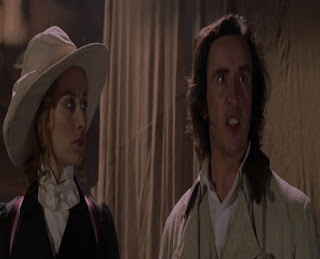 The journey starts off good, they take a hot air balloon to France. There they meet a French woman named Monique Laroche, and she inspires to be more than just a simple girl. She manages to convince Phileas Fogg to let her tag along for the ride. However Lord Kelvin is not willing to let Fogg win this race. He has hired a private detective to stall him by any means necessary. Lord Kelvin even resorts to allying himself with a female Chinese warlord as they share a mutual goal. Will Fogg make it back to England in time? 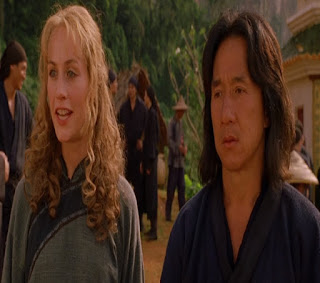 Overall Around the World in 80 Days isn't so bad as I had heard. It flopped at the box office back in 2004 and the movie also didn't have much luck with critics or regular folks. Some also complained that is wasn't very true to the original novel, but since I've never read it I shouldn't be able to comment on that. But I found it hard to really hate, it does feature some decent humor and a bunch of goofy fun.

I will remember this one next time my son and I are looking for something to watch, I like Jackie Chan.

When will the film industry learn!
Don't remake classics. This mob wouldn't hold a candle to the original stars of the classic. David Nivens are a rarity!

To see bastardisation of a movie, see the rubbishy remake of "Murder on the Orient Express". Agatha Christie would be spinning in her grave and Sean Connery must have got a shock to see his role in the original to have a "colour over"!!
But it was good to see Depp get twelve fatal stabs, I reckon millions of Aussies and Kiwis would have lined up to plunge the knife in also. Him and his "bed-warmer of the time" and her wretched dogs which could have brought in rabies of our country.
Depp who can't read guarantee regulations or thinks he is above the law. Aaaaaaaaaaaaaaaaah - yuck.
Colin

**** Depp who can't read Quarantine regulations!
The name Depp like Trump gives me "Jittery" fingers!
Thank God for our gun laws in Australia......Depp and Trump likes would be right in my firing line.
Colin

I've seen the old movie.
Just finished reading a Jules Verne book, The Mysterious Island and liked it. Wonder if they made a movie of it.

I prefer the original.

AS it turns out my son was home sick yesterday so we watched this movie...we both enjoyed it. I do not care if it does not stick to the original story, it was entertaining. I loved Luke and Owen Wilson as the Wright Brothers!