Fact of the Day: Columbus in Trouble 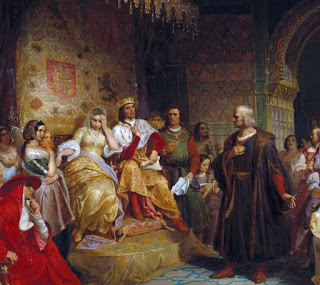 Christopher Columbus didn't quite meet praise back in Spain after his voyages to the New World. His governance of the native people was often tyrannical and genocidal. King Ferdinand and Queen Isabella's court eventually learned of this and had him imprisoned though he was released weeks later. Columbus ultimately claimed he was always doing good as he was spreading Christianity to the region.
Posted by Adam at 12:00 AM

And that, boys and girls, is why Americans celebrate Columbus Day.

Spreading that and germs. Winner.

Another greedy murderer and exploiter hiding under the cloak of Christianity.

People take advantage of their power...over and over again.

Columbus couldn't find much gold in the new world and instead brought back slaves, which is reported to have horrified Queen Isabella.

yeah, being on the receiving end of Christianity was brutal..