Fact of the Day: Gustav I of Sweden 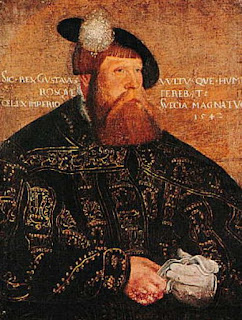 Gustav Vasa was originally a rather low-ranking noble whose father was killed in the Stockholm Bloodbath which was a political murder plot by King Christian II who ruled Denmark, Norway, and Sweden. He led Sweden's rebels during the Swedish War of Liberation where they deposed Christian II as king and made Gustav King of Sweden instead.
Posted by Adam at 12:00 AM

Email ThisBlogThis!Share to TwitterShare to FacebookShare to Pinterest
Labels: Denmark, fact of the day, norway, sweden

What back stabbing and war can do for one's status

I hear its beauitful in Norway.
Lisa

Nice haircut and beard though.

I am going to out on a limb here and say you are probably fan of Versailles. Such a fun show, more engaging then I thought it was going to be. Plus lots of eye candy for the ladies (and boys) Now I am reading a history book about the 17th and 18th century Europe.

It is, but Norway is not cheap.
Health care for the people is wonderful.
A great Health Care System!
Colin