Fact of the Day: King of England and France 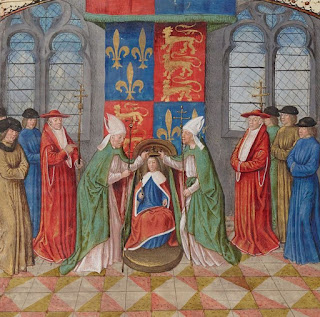 King Henry VI of England was made King of France by the will of his grandfather Charles VI of France. King Henry VI inherited both thrones at a very young age (before he turned one) however there was more than one of those issues that conflicted where the Throne of France wasn't all his. The biggest issue was that Charles VI's son Charles the Dauphin was still alive and he was taken out of the royal line by his father. The French prince claimed that the agreement was null and void as his father was mentally unstable and was forced by King Henry V of England to do so. When England started to lose their side of the Hundred Years War, peace was established when Henry VI gave up the throne to France and married Charles' niece. Losing thrones would become another running theme for Henry VI as he lost his crown twice during England's War of the Roses.
Posted by Adam at 12:00 AM

Thats really interesting but I'm pretty sure I haven't learned it on History lessons in school.

Maybe that is how musical chairs started

I'm always in awe of these royalties. Such interesting lives they live.

Henry VI was not a good king although he reigned for a long time.

I saw the site in Wakefield Tower (Tower of London) where Henry was said to have been murdered on the orders of Edward IV (who was crowned the morning after Henry's death). I bet you would love exploring the Tower of London, Adam!

So much drama with these royals.