Fact of the Day: Lavrentiy Beria 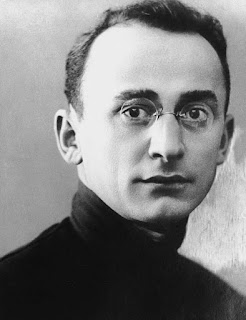 Lavrentiy Beria was one of Joseph Stalin's top subordinates during his rule as his lead the security of the Soviet Union and the NKVD. Stalin introduced him to FDR and referred to him as "Our Himmler"  to the president. If fate had been a little different, Beria could have been the most powerful man in the Soviet Union after Stalin's death. However Nikita Khrushchev opposed him and had Beria executed for treason once he took power.
Posted by Adam at 12:00 AM

All a roll of the dice, or head I guess.

Not much changed after the Tsars... Just new Tsars.

And good riddance too.

I hadn't remembered this person. He had a reputation for being uncompromisingly ruthless, and like others of his ilk, he groveled for mercy when condemned and prior to his execution.

Thank goodness for our peaceful transition between leaders.

Politics can be a cruel parent, and this guy probably got what he deserved.

This fellow was probably more wicked than Himmler, certainly had more blood on his hands.
Colin