Fact of the Day: Muhammad XII of Granada 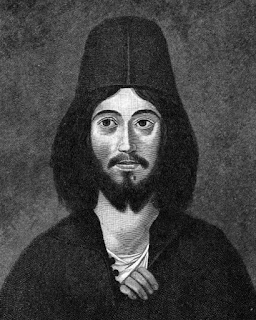 Not long before the discovery of the New World, most of present-day Spain and Portugal had been ruled by Muslims who had conquered the area for almost eight hundred years. The last ruler there was Muhammad XII who ruled the city of Granada. He eventually had to accept the rule of the new Catholic monarchs, however they soon forced him into exile until his death in Morocco.
Posted by Adam at 12:00 AM

I wonder what the world would be like now had Catholicism not taking hold, initially so violently, here in Spain.

Religion liked to push itself on all

Wow, I didn't know that. Such a sad, but interesting details. Thank you for stopping by my blog, and leaving me such a kind comment :)

Very interesting information. I sure didn't know that either. You have a super Saturday.

Another fact I never knew. Hope you and Daisy have a great weekend.

History recorded him weeping as he left Granada, and his mother is reported to have said, "Do not weep like a woman over what you could not defend as a man."

Glad she wasn't MY mother.

@ Stephen Hayes -- yeah, sounds like SHE should have been in charge of the battle!

The Surrender of Granada must have been a bitter event for Muhammad XII of Granada and an exhilarating one for Ferdinand and Isabella.

I didn't know any of this.