Fact of the Day: Prince Johns 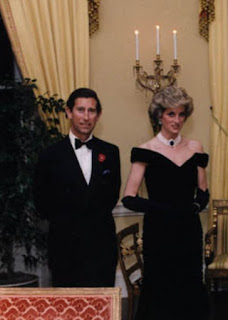 While John is not an unfamiliar name in English/British royal history, it had never been a name that amounted to much luck. King John had a disastrous reign where he lost some of his rights as king along with a lot of family land in France. Also two princes named John (one son of Edward VII and one son of George V) died young. Princess Diana had wanted to name her first son after her father John Spencer, but she was discouraged by royal tradition, so the family chose William instead.
Posted by Adam at 12:00 AM

Cool to know! Thanks for sharing!

Actually didn't know that, William is a nice name.

Poor Diana, but maybe it was for the best. I love her two sons.

People and their belief in luck, gotta roll your eyes at it.

Another royal name that is avoided, at least on ascension to the throne, is Charles because Charles I was deposed and beheaded. His son Charles II was reinstated but the name has never been subsequently used by a reigning British monarch since the late 1600s. I suspect that when Prince Charles comes to the throne, he will use one of his other given names as his regnal name.

Had no idea about these facts, very interesting. I do prefer the name William to John.

I didn't know that about John.

Interesting.
What about King Ralph?? lol

Charles is another name that hasn't fared well for British monarchs, as the future Charles III should be aware of.

That is interesting about the name John. I had no idea.

Charlie and Camilla on the throne. I think that would hurry the mostly Anglo-Saxon countries that still have the British Monarch as their NON-RESIDENT Head of states to become Republics within the British Commonwealth or as it should be correctly called - THE COMMONWEALTH.
I suspect that Australia and New Zealand will hold plebiscites on becoming a Republic as soon as Queen Elizabeth dies. I presume Canada also?????????????????
I am a Republican - that doesn't mean what it does in the USA!!!
Good God who is Turnip Top going to insult next - the latests outbursts re: Veteran Navajo Indians and support for the Far Right in the UK. British PM Theresa May was not amused!
Colin

I didn't know that either..thanks.