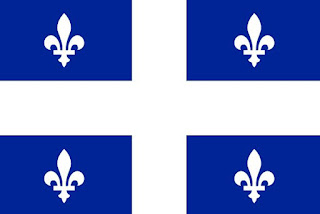 While the subject of Quebec staying or leaving Canada is still a major issue in the province, in 1995 Quebec voted on whether its citizens agreed on the issue or not. Quebec citizens were pretty much split on the issue. After a very large voter turnout, they had a "No" vote on whether to leave Canada pass by a just a small percentage.
Posted by Adam at 12:00 AM

Email ThisBlogThis!Share to TwitterShare to FacebookShare to Pinterest
Labels: canada, fact of the day, france

It was a close call, that's for sure.

Argh...this issue has been going on for far too long here. Cray cray!

Yup, it was a very close call. I voted in that referendum and remember the tension very well.

Everyone seems to want out of things these days. Greetings.

Hi! It's a very difficult issue. Thanks for your information.

The issue seems to be going away and I hope it goes away for good. I lived in Quebec for 2 years in the 60's . I like Quebecers and would not want to see them leave the country.

If I recall Charles De Gaulle caused a furore on his state
visit to Quebec when he was President of France.
"Vive Quebec" or some such statement - maybe with Libre for free!
Colin

I hear California wants to vote on leaving the Union. I thought the Civil War resolved that issue.

I think "Turnip Top" might be the cause this time - ha ha!
Colin