Fact of the Day: Young Arthur 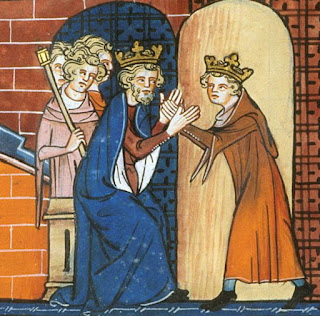 When King Richard I ruled England he had no legitimate heirs. King John was his successor, but there was a problem with the young Arthur who was the son of Richard's and John's brother Geoffrey who was older than John. Following rules of succession, Arthur should of been crowned king instead of John. However King Richard I feared that Arthur was too young and under too much influence of the French king, so he made John his heir instead. King John eventually had Arthur imprisoned, and he vanished after a certain point. Most believe that he was murdered on King John's orders.
Posted by Adam at 12:00 AM

These are all Jerry's ancestors. What a proud heritage...

Way too much stuff going on in the kingdom! Hugs...

Those could be dangerous times to live...or die.

Political intrigue never goes away. One wonders about the dangers these kings felt regarding Arthur.

You cannot trust a king or queen, they will kill you, honest!!!!!!

Back then, being born into a royal family could be deadly.

Soooo much drama all the time.

Arthur had a short, sad life. It must have been difficult (and scary) to grow up in the shadows of Richard the Lionheart and Henry Plantagenet.