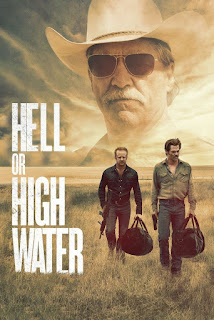 2016's Hell or High Water kinda slipped passed my radar last year. I don't even remember it coming out though it had plenty of Oscar nominations when the Academy Awards happened earlier this year. Though its box office run was rather mild, some movies are born just to win Oscars it seems sometimes. I'm pretty sure the only reason I knew about it was because I have been trying to catch up on movies with Jeff Bridges, as I think he is the one of the most talented people in Hollywood. The movie lost the Oscar for Best Picture to Moonlight, but what did I think of it? 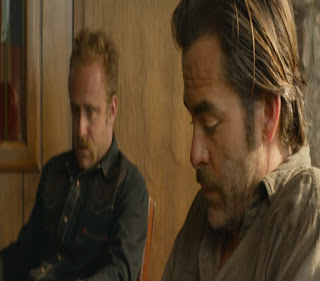 The film is about two brothers in West Texas. Their mother just died and due to some bad deals with a reverse-mortgage, their ranch is up for foreclosure. Tanner Howard is the the wild brother who has had trouble with the boys in blue before. Toby Howard is the kinder softer brother, however he agrees to do something that could land both of them many years behind bars if they get caught. Despite not looking like a pair of geniuses, they actually know what they're doing. Their plan is slow and will take quite some time to carry out. 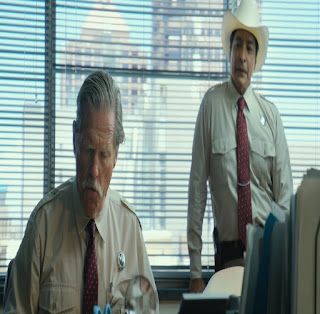 Their actions catches the eye of the aging Texas ranger Marcus Hamilton. He is just once case away until his retirement is over. When the brothers become hard to catch, Marcus gets obsessed with the case much to the annoyance of his partner Alberto Parker who treats this as something routine. But Marcus Hamilton isn't going to rest until he has solved the case for good. However the brothers are more anti-heroes than villains (well at least Toby anyway), but what happens with two very different forces of "good" collide? 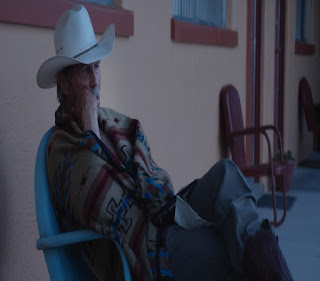 Overall I was fairly impressed by Hell or High Water. Now granted I've never seen Moonlight, so I can't compare them, but I figured this had a decent chance at Best Picture though I didn't fall in the love with the film either. It's a good story, but with a brother like Tanner, it's hard to believe the two were as successful as they were. Though I will say, it's hard to believe Jeff Bridges didn't get the win for Best Supporting Actor (eventually losing to Mahershala Ali for his role in Moonlight) because he really does an amazing job here.

Hmm, I may have to see this one. I agree, Jeff Bridges is stellar. And I'm a big Chris Pine fan. He's been playing a variety of roles, well.

I remember that this one got very good reviews but I haven't seen it yet.

I definitely want to see this! The director also made Wind River which is an amazing movie. I love Mahershala...he did a great job in Moonlight and has so much potential.

I was pleasantly surprised by this movie.

Jeff Bridges is an accomplished actor and I suspect then that this movie must be watchable.
Colin

A bank scene in this movie was shot at the one we actually banked at in the town we lived in New Mexico, on the West Texas border. I have heard good reviews on this movie.