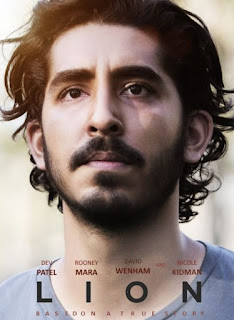 Lion is certainly not a movie I quite recall remember about hearing. I put it on my list for some reason, either it was the cast or perhaps was that it was nominated during the Oscars. I didn't realize that its star Dev Patel who isn't really well-known for Americans, he was actually the lead role in the Oscar-winning film Slumdog Millionaire. Unlike his original film role, he was nominated for his acting in Lion but lost to Mahershala Ali for his role in the movie Moonlight. The movie did well at the box office and with critics, but what did I think? 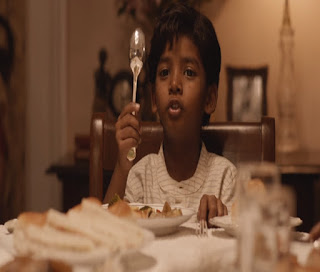 The movie is based on the real life story of Saroo Brierley, who was born in India. Coming from a very poor country, Saroo and his brother Guddu try to help their mother get supplies. The boys often hop on a train and take coal (at least until a guard sees) so they can trade it for food or other things. However young Saroo travels with his brother near a train station while his older brother finds real work. His brother tell his not to move, but eventually he gets bored and finds himself stuck on a real train. He eventually makes it somewhere very far from home and in a region of India where he does not speak the main language. 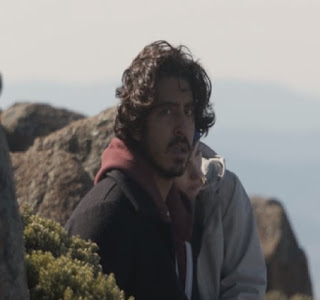 Eventually Saroo is adopted by two Australians named John and Sue Brierley. They raise him right and give him all the love parents would give their biological child. Saroo when he grows up becomes fairly successful, he has a good job and a nice girlfriend named Lucy, however the thought of his mother and brother still being India starts to twist his mind and soul. A friend tells him of a certain technology that may give him a clue of where he was from as he never knew exactly where he lived before he got stuck on that train. But will he ever reunite with his mother and brother? 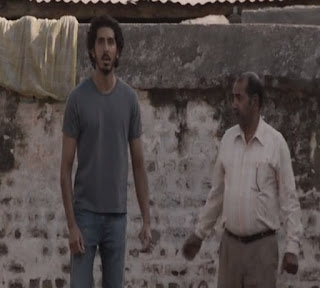 Overall I can really see why the movie Lion was a pretty big hit with the Oscars and whatnot. It certainly was much better than the over-rated La La Land but neither of them won Best Picture for the year of 2016. I will say the only parts that kind of dragged on was when Saroo was being upset about not being able to find a trace of his birth family and was being all depressive and whatnot. But other than that, the story is really touching, is well-acted, and might make you cry depending on who you are.

Hello, Adam! I didn't watch this movie yet because I'm sure that I am going to cry a lot, but I really want to watch it.
By the way, I loved La La Land! :P

Dev Patel is such a handsome young man. My Rare One liked this film but she had also read the book it was based on and she said the book was better.

Also was outrageously brilliant in 'The Best Exotic Hotel Marigold" and the sequence movie.
An actor "par excellence".
Colin

I read the book, which was really good, so I hope to see the movie soon.

I cried like a baby at the end. Loved the real footage of him and his mom. There's a great 60 minutes on the real story that will make you cry.

We loved this movie.

I enjoyed it but didn't think it was oscar worthy.