My (Not So) Favorite Quotes: We're Saying Merry Christmas Again 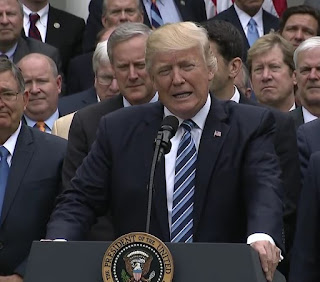 It's hard to say who is the bigger fool, Trump himself or his flock of sheep who honestly believe he's a deeply religious man. He certainly can play the religious-right like a fiddle, as when he said this all the conservatives started to applaud. It's not against federal or state law to wish someone Merry Christmas, he also can't force private companies to do so either. People say "Happy Holidays" mainly to show respect to those who don't celebrate Christmas. But respect for others is not something Trump or his deplorables really know well.
Posted by Adam at 12:00 PM

I have no words for the stupidity of thinking Trump is a deeply religious. Religion, like everything else with him, is transactional. I suspect that he doesn't believe in God. I have no problem with "Merry Christmas," in saying it or having it said to me. I try to wish my Jewish and Muslim and non-Christian friends "Happy Holidays" and "Merry Christmas" to others. Really, it's all about the love and feeling and good wishes of the greeting, not the actual words!

I always say Merry Christmas but if someone is Jewish or of another faith I try to pay respect to their faith as well. Trump is a buffoon who uses whatever he can to pump himself up. He would sell Christmas off if it meant he would make more money. What a sad, sad orange man

I also say Merry Christmas and always have, but there are other faiths and I'm not going to knock any of them, we all need to respect one another because we do all live together and we are all different. I wasn't put on this earth to judge others, and I'm certainly not going to demand that you give your Seasons Greetings in any particular way.

Several years ago when people started whining that we can't say "Merry Christmas!" I started saying it. Rarely gave that greeting or "Happy Holidays!" before then.

People who hold supremacist values, whether of race, gender or religion, don't believe in inclusivity. OF COURSE they pointedly insist on saying "Merry Christmas."

I remember a time in New York City when we would say (and maybe it was just my friends... I don't know for sure)... anyway, when we wanted to say Fuck You, we would instead say Merry Christmas. So Merry Christmas Donald.

Who cares what type of greeting people give as long as it's a friendly one.

We here usually say Merry Christmas and not happy holidays, it's always been the same but I bet it will change as saying Merry Christmas might offend some race of people.

I agree that Trump plays the religious right like a fiddle - he's so far from Christian that I'm amazed they can't see it.